The Black Angels at BV SXSW 2010 (more by Tim Griffin) 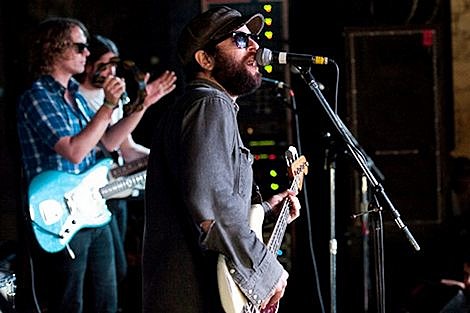 It's already been nailed down that The Black Angels are definitely on board for the super terrific ATP New York in Monticello this year (the last and final lineup was originally announced), as well as their jaunt with Black Mountain that will take them to Bowery Ballroom on November 3rd (tickets).

But besides those pair of unmissables, The Black Angels are also scheduled to play a secret show in NYC on 9/7, just days after that ATP appearance! The show is NOT open to the public, but we have 10 pairs of tickets available for giveaway! Details on how to win your way into the show (which will also have an open bar), and a free poster to go along with it (sorry you must be 21+ because of the open bar), are below.

All of the ridiculous touring and related hubub is directly related to Phosphene Dream, The Black Angels' new LP, due on 9/14 on Blue Horizon Records in 180 gram vinyl/CD/digital forms. Preorder it now.

Their tour-mates Black Mountain also have that NYC show at Knitting Factory coming up even sooner, August 30th to be exact. Tickets are still on sale. Grab an MP3 of Black Angels covering Black Mountain (which originally appeared on limited edition release a couple of years ago), above (along with a re-post of new songs from both of the bands' new albums).

More details on how to enter the contest, and some Black Angels video with all dates, below...

===============
Want to win a free pair of tickets to THE BLACK ANGELS secret show? Be 21+ and email BVCONTESTS@HOTMAIL.COM (subject: Black Angels). Include your first and last name and your physical address. Winners will be contacted via email and then sent a poster and the tickets along with the location and details in the mail.