Black Anvil at Saint Vitus in 2011 (more by Fred Pessaro) 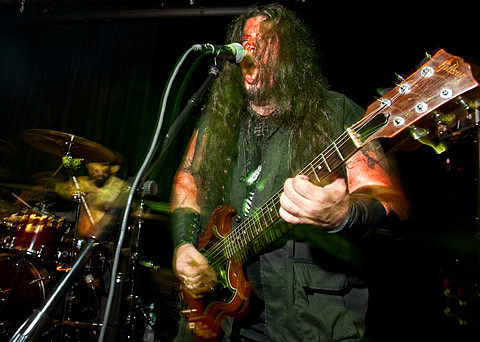 NYC's black metal crew Black Anvil are streaming a new song called "Still Reborn" off of their previously mentioned forthcoming album Hail Death, due out on May 27. The song, like the rest of the album, is a bruiser--big, riffffed-ouuuut and full of snarls and group backing vocals. The album's deservedly getting some attention, and, in his writeup of Black Anvil's other new song "Eventide," our former metal maestro Doug Moore called the track "big-venue-ready stuff -- I could see this tune going over extremely well with a huge, boozy European festival crowd."

Don't book your ticket to Wacken just yet--you can catch Black Anvil at Saint Vitus on July 20 with a NYC-area support crew consisting of experimental oddballs Psalm Zero, thrashers Fantom Warior and BK black metal crew Yellow Eyes. Black Anvil will be playing the entirety of Hail Death, so July is your chance if you like what you hear below. Tickets are on sale.