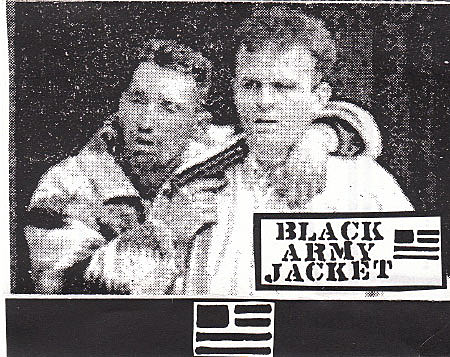 Black Army Jacket was an American grindcore / power violence band... Their ex-members can now be found in bands like Hope Collapse, Municipal Waste, Matt Pond PA, Burnt By The Sun and Birds of Prey.

The band was started by Andrew Orlando (ex-guitarist of Milhouse and owner of Reservoir Records) and Carlos Ramirez... both fans of bands like Terrorizer, Assück and Napalm Death and wanted to create a band in those styles. ...Queens, NY-based Chainsaw Safety Records would go on to release the band's The Path of Two Swords As One 7" and the band started to tour regionally shortly after... [Soon after] Dave Witte joined the band on drums. Now a four piece, they toured with California's Benumb and Noothgrush.

In 1998, BAJ... wrote throughout the year and entered the studio with Dean Rispler (Killing Time, 25 Ta Life) in the producer chair. The resulting album, 222, saw the musicians incorporating hints of death and black metal along with some more traditional elements of hardcore to their sound. They toured extensively to support their debut.

They came home from tour in mid 1999 and began to write newer, more technical material... [but] after a tough show in Worcester, MA the band decided to break up. Adubato and Witte then formed Burnt by the Sun, whilst Ramirez started melodic rockers Lakota a few years later. Andrew Orlando went on to join Anodyne and then Disnihil in the early 2000s. - [Wiki]

We are proud to announce that NYC powerviolence/grind greats Black Army Jacket will return to play a reunion show at Cake Shop on September 4th! Support is still TBD. Tickets are on sale.

The show is one of two lined up for the great Black Army Jacket with the second being Best Friends Day in Richmond, VA on Aug 19 - 22:

Best Friends Day started in 2001 with a group of 40 kids celebration their friendships at the end of the summer by visiting Hadad's Lake.
Over the last 9 years, the weekend has grown from one day to four and has included rollerskating, bowling, a driving range, a water park, a scavenger hunt, many of bands, as well as an assortment of other weird fun.

Now, I wouldn't exactly classify performances by Propaghandi, Negative Approach (who play this weekend!), Municipal Waste, Tim Barry, Off With Their Heads, Brainworms (their last gig ever), and more as "weird fun", but hey, to each his own. Full festival lineup is below with the NYC show flyer, some video and full Best Friends Day lineup... 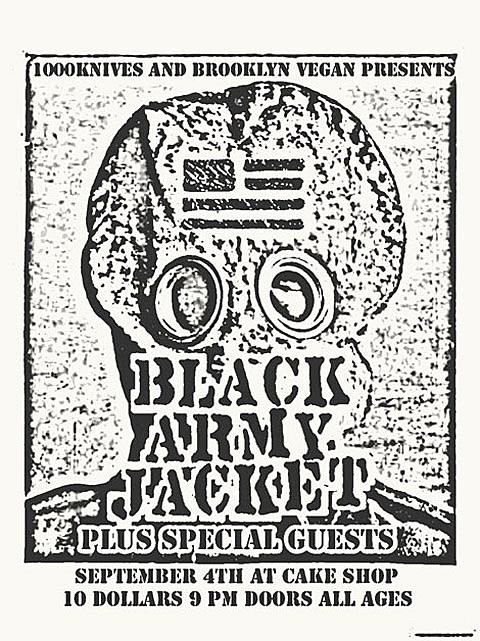