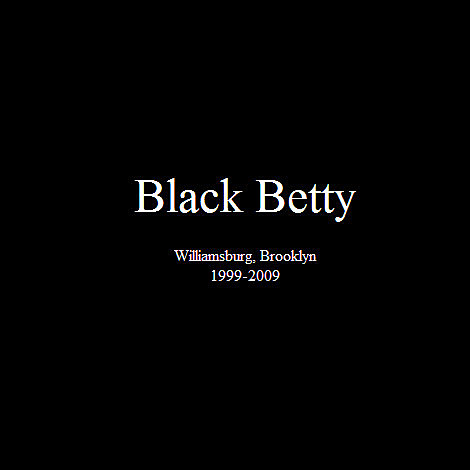 "When I stopped into Black Betty last night [June 15th] around 8:30pm, there was an eerie sense of calm and night-like-every-other-nightliness in the air. The kitchen was smoky, the waitresses conferring about honoring reservations, and the tables populated, but not overly cluttered. It was hard to believe this place that embodied so much of Williamsburg's spirit would never again open its doors.

About two months ago, partners Bud Schmeling and Sandy Glover were given the sad news that they would not have the opportunity to renew their lease on Black Betty (366 Metropolitan Ave), the restaurant/music venue that has become a beloved neighborhood institution. Despite holding fundraisers in preparation to meet the rising rent of the neighborhood, and operating a business that, even in the worst of economic times, has flourished, Schmeling reports his landlord signed over the space to another restaurateur without notice or explanation, leaving Black Betty and her devoted patrons without a home." [Williamsburg Greenpoint News + Arts]

Rev. Vince Anderson and his Love Choir played the final show at the Brooklyn venue. Jonathan Toubin was in the house during that performance and tweeted that "Reverend vince and his love choir are breathing fire!" After the show, Chris said, "Closing night at Black Betty with the Rev was one of the most amazing musical experiences I've ever heard." Reverend Vince himself says, "Thanks to everyone that came to the show last night. I love you all."

According to Brooklyn Based, "Stephen Tanner, currently of Egg and formerly of Pies'n'Thighs, will take over the Black Betty space." The above picture is an actual screenshot of what Black Betty's website looks like today.

Video of the Rev performing in 2006, and other videos shot at the club, below...

The Child Ballads peforming the Jonathan Fire*Eater Song "No Love Like That" at Black Betty in Williamsburg, Brooklyn, New York on 4/24/07