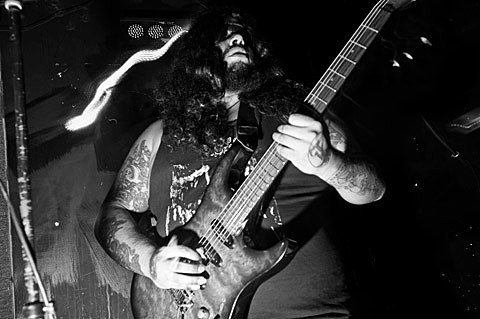 Though previously listed with the same lineup as the show they just played at Acheron, this Friday's 9pm Black Twilight Circle show at The Charleston will feature an almost entirely different lineup with Raspberry Bulbs, Volahn, Arizmenda, Shataan, and The Haunting Presence. Black Twilight Circle also visit WFMU that day (10/7).

The show is also one of two upcoming shows for Raspberry Bulbs who will also join Villains, Occultation and Skull at Saint Vitus on 10/18 (tickets).

Speaking of black metal, the.... New Yorker wrote a piece:

The fertile and fractious U.S. scene in the genre known as black metal can be understood through a familiar moment in rock history. In the sixties, British bands like Led Zeppelin and the Rolling Stones mined American blues, first copying their heroes and then creating something vivid and novel. In the nineties, a range of American acts began drawing from the work of Norwegian metal bands that were famous mostly for a look and for several unpleasant events. The Norwegians were largely faithful to the "corpse paint" costume, in which the face is covered in white makeup, with black circles drawn around the eye sockets. Upside-down-cross pendants and spiked bracelets were common accessories. The tabloid-worthy events centered on a musician named Varg Vikernes, of the one-man band Burzum, who encouraged and participated in the burning of churches. In 1993, while playing bass in a band called Mayhem, he murdered the guitarist, a man known as Euronymous.
Until recently, it was a legacy that the genre couldn't shake. But now American bands such as Liturgy, Krallice, Absu, Leviathan, Wolves in the Throne Room, and Inquisition have left a fair amount of the pageantry behind--not to mention the violence--and helped to create a community, as well as a musical moment that is rife with activity...

The article goes on to talk about Wolves In the Throne Room's recent show at The Bell House.

Wolves in the Throne Room, who premiered a track at NPR, have also since received 'Best New Music' from Pitchfork.

Speaking of Liturgy, The Quietus recently interviewed Aaron Weaver of Wolves in the Throne Room . They discussed, among other things, Liturgy and its place amongst the "black metal elite": Aaron Weaver says:

"Wolves in the Throne Room has absolutely received the same kind of criticism, because over the years I've said the exact same thing [as Hunter regarding black metal's ability to be positive and optimistic]. That's something that I believe very strongly. I think that maybe the difference is that I've always said that we don't play black metal. I refer to Wolves in the Throne Room as a black metal band just sort of out of convenience. But I've also been really clear over the years that I do think that true black metal, which is a worthwhile and very powerful thing, does need to be negative. It does need to be rooted in the darkest aspects of the human experience - bitterness, negativity, hatred, violence, tribal warfare, mass murder, these sort of things lurk in the human experience, and it's always been there. And true black metal channels that incredibly destructive and insane and violent energy."