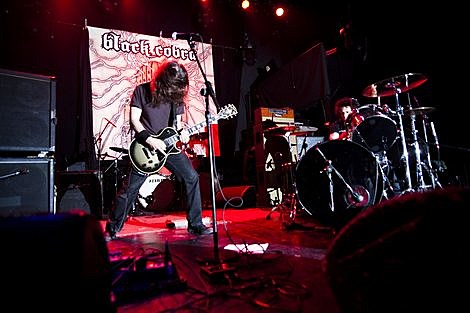 There aren't many cases when a duo can make a seriously ear-splitting racket. Jucifer (who is coming to NYC). Dark Castle (them too). Lightning Bolt. And one that you definitely can't leave off of that list is the thundering and formidable Black Cobra!

The San Fran band was last seen in NYC at the ultra-ultra-sold-out Gramercy show supporting the great High on Fire, but now the band (which features members of the great Cavity and Acid King) will hit the road for a US headlining tour of their own sponsored by BV. What's more? It'll be alongside similarly muscular miscreants, Howl! Struck By Lightning (who knocked me out at The Studio in April) and the fantastic French doom outfit Monarch! will rotate in the final slot. Struck By Lightning will be on the bill when the package impacts NYC on July 30th, where they will join forces with the incredible East of The Wall at The Studio at Webster Hall. Tickets are on sale.

In the meantime, Black Cobra's Chronomega is out NOW via Southern Lord. Howl, who played NYC post-SXSW, have a new album, Full of Hell, out now via Relapse. Struck By Lightning released Serpents on Translation Loss in the tail end of last year.

Full tour dates, the tour flyer, and tons of video are below... 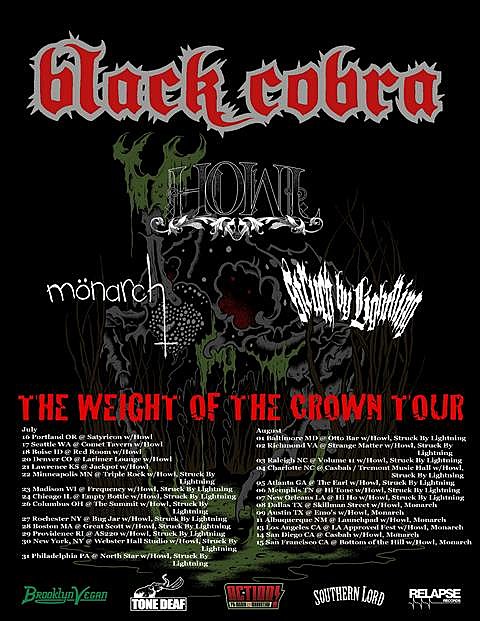