by 'Week in Indie' Bill Pearis 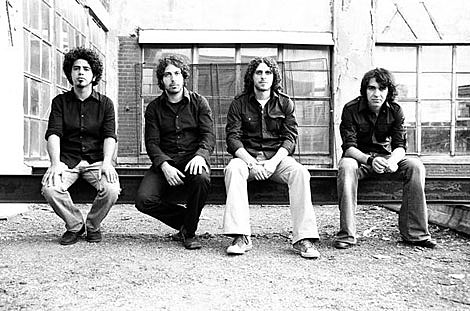 Watching the new line-up of Dears at Hiro Ballroom two weeks ago during CMJ, as good as I thought they were, it was definitely a bit strange to hear older songs like "Lost in the Plot" and "22: Death of All the Romance" and not see the old band up there, especially emotive guitarist Patrick Krief and fill-loving drummer George Donoso. They were definitely part of what made the Dears (circa 2003 - 2006) so amazing.

So it's good to know Krief and Donoso are still playing together in Black Diamond Bay who are on a short East Coast tour this week, including three dates in NYC. What started as a Patrick Krief solo project while still in The Dears has become a full-blown band (rounded out with bassist Andre Bendahan and keyboardist Roberto Piccioni) with their self-titled debut out soon. (They're selling it at their shows now.) Krief's style isn't that dissimilar from what he did in his former band, heartfelt songs with a sort of epic swagger to it. Check out the MP3 above and video after the jump to see what I mean. And go them live. Dates follow as well.