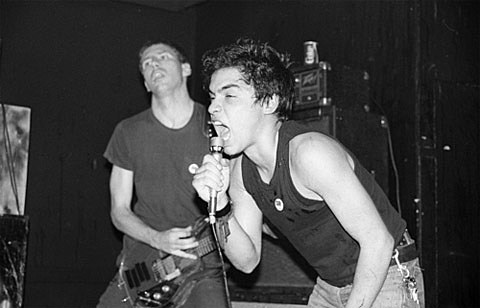 BLACK FLAG has reformed and is in the process of putting finishing touches on a new album with founder Greg Ginn on guitar, Ron Reyes on vocals, Gregory Moore on drums and Dale Nixon on bass.

Gregory Moore was never a member of Black Flag, but played in the post-BF project Gone with Ginn. "Dale Nixon" on bass essentially means that the there is no set bassist, as Greg Ginn credited himself with the psuedonym on My War and countless other BF recordings. From a release:

While Dale has lent his skills to the new album, he is currently contractually obligated for a stint on Celebrity Rehab. Still, as he has always done in the past, he will continue to provide insight and spiritual guidance to the current bass player.

What's more? The band has ALSO announced that they will embark on a 2013 US tour in addition to previously discussed dates. The first US date has been set for Muddy Roots Music Festival in Tennessee, on 8/31/13 with more announced soon.

Make sure not to confuse Black Flag with Flag.