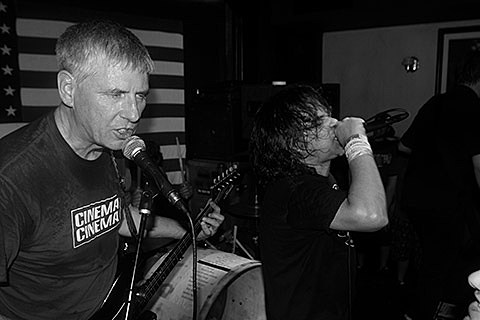 Greg Ginn, the only remaining original member of Black Flag, has been accused of child abuse by his ex-wife Marina Ginn, Consequence of Sound reports. Marina filed an affidavit in Williamson County Texas District Court on October 10th. Here are some excerpts:

Isadora Ginn and Karis Ginn live with my ex-husband in an industrial building that also serves as a place where he conducts business and his band rehearses. They have complained that his behavior has recently grown increasingly erratic, that he is routinely denying them food and threatening them, that he is increasingly abusing alcohol and drugs in front of them, and that they have witness confrontations and physical violence at the building where they live.

My daughters have complained that they are denied food in the mornings after doing strenuous, private baseball practice with a highly paid private coach, as well as performing labor such as cleaning and doing dishes in an industrial building with many employees. My children have told me they feel like they are going to pass out in the mornings because they are so hungry and their father yells at them saying, "quit being lazy".

...My ex-husband's behavior towards my daughters has become increasingly bizarre. My daughters are 10 and 7 and have voiced that they feel very uncomfortable when their father tells them "you're hot" and whistles at them. As a mother, I am very concerned for my daughters because my ex-husband's behavior has changed greatly. His drug use has increased and my daughters are voicing to me that they do not feel safe and don't want to return to his home. Their father ridicules them and tells them they are getting fat and need to lose weight and that their diets will have to be more strenuous.

...[My daughter] was taken to the emergency room on the night of October 7, 2014 and it was explained that her condition is stress and anxiety related. The doctors said my daughter could not be without the supervision of a parent due to her health, but I know their father will leave them unattended because of his drug and alcohol use and because of the length of time that he practices with his band.

You can read the full thing here. Marina's friend also launched a GoFundMe campaign to raise money for her legal fees.

Black Flag recently cancelled the Brooklyn show that was supposed to take place earlier this month. They've also had other issues with both Ron Reyes leaving (after Greg allegedly threatened his family) and Dave Klein leaving within the past year.