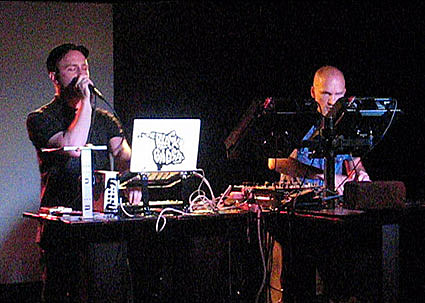 Despite the many dance possibilities this past weekend, I only ventured out to see the Black Ghosts at Studio B. Suprisingly, I arrived around 12:30 to an empty dancefloor - especially for that time on a Saturday night. As people slowly trickled down from the rooftop garden, it started to fill up though, and by the time the Ghosts went on at 1:30, the floor was healthily, but not overbearingly packed.

The duo opened with some slowly building electro goodness before Simon launched into Something New. For the following hour and half the crowd got down pretty fiercely to a mix of the Ghosts' own beats as well as some they had sampled. Tracks from the Black Ghosts self-titled debut album were dispersed throughout the set. Simon's energetic live vocals contributed invaluably to the performance, though more mellow than the last time I saw them at Glasslands. At Glasslands I danced for their entire performance. At Studio B there were a few lulls where I found myself wishing they would drop something a bit more upbeat. Overall it was still a great performance. A partial set list of their own songs they performed, as well as a few of the other songs they played/sampled, below.

This week the dancing is off to an early start. Wednesday night (tonight - July 23) there is a pretty massive party going on at the many roomed Rebel. I'm still not sure how I feel about that place. It's nice to be able to meander around if the deejay in one room isn't pushing your buttons, on the other hand, if there's someone deejaying that you specifically want to see you can have a hell of a time figuring out where they are. There are enough people on the bill that it should be a blast either way. I recommend checking out the following deejays if you decide to go to this party:

Eli Escobar - check out his (and Johnny Cocco and Roctakon's) blog - Outside Broadcast for "remixes, vinyl rips, mix cd's and other fun stuff".

Dominique Keegan - 1/2 of electro-rock band the Glass and founder of Plant Music. Be sure to download his Jusque le bout pour voir comme ca sent 1 mix at the top of the post, it's a good one!

Nick Catchdubs. I have just now, while writing this post, become obsessed with his edit of the Cardigans Love Fool with Zongamin's Bongo Song. Check it on his myspace!

AC Slater was the focus of one of my first posts on here. He's still doing his thing and making good tracks...a lot of his more recent ones can be heard on his guest mix for kiss 100 which you can download at the top of this post.

Those are just my recommendations. There are quite a few more people deejaying the party if none of those appeal to you. See flyer below for the full line-up: 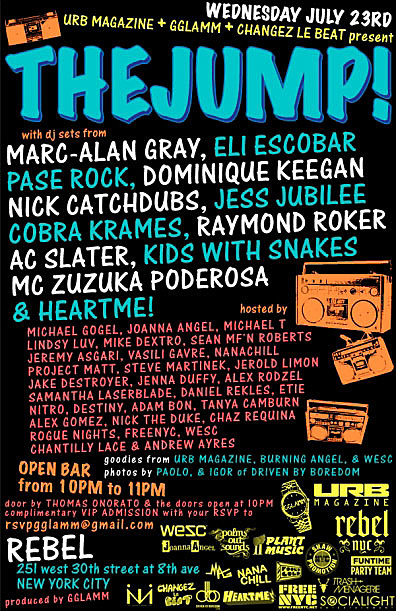 Something New
Repetition Kills You
Some Way Through This
I Want Nothing (into Organ Grinder by Sinden & Trevor Loveys)
Any Way You Choose to Give It
sampled "work it" from Harder, Better, Faster, Stronger by Daft Punk, transitioned into a sample of Beeper by the Count and Sinden

They also at some point on the earlier side of the set sampled From Disco to Disco by Whirlpool Productions as well as Mars by Fake Blood.

That's all for the week in dance so far, but info on many more of this week's dance events will be on its way soon!