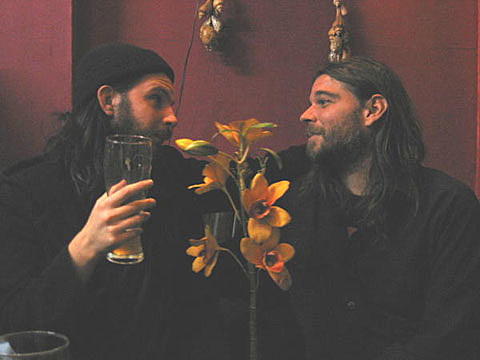 The Black Heart Procession has been cranking out gothy folk-rock for more than a decade now, and will release their new mini-LP Blood Bunny / Black Rabbit on 10/12 via TRL. Featuring three new BHP tracks, the release spans 40 minutes and features a remix from Eluvium and a collabo with the legendary Lee "Scratch" Perry. Preorder the mini LP, and dig on the first track "Blank Page" available above. The band will tour off of Blood Bunny / Black Rabbit as well, playing LPR on 9/28 before embarking on a tour with The Books. Tickets are on sale for the NYC show. All BHP dates are below, and non-BHP Books dates which include Carnegie Hall, are HERE.

In related news, both members of BHP served time in Three Mile Pilot, and the band has returned from hiatus to release a new LP for TRL. The Inevitable Past Is The Future Forgotten features "What's In The Air" is the first Three Mile Pilot album in 13 years...

Formed in the early '90s, the group released a debut album to a fair amount of acclaim, followed by Chief Assassin To The Sinister, an album that garnered the attention of Geffen Records, with whom they signed for all of one album. After enduring the major label wringer, the group released Another Desert, their most emotionally resonant and commercially successful record to date. Shortly after, bassist Zach Smith formed Pinback with Rob Crow, and singer-guitarist Pall Jenkins began a new project with Three Mile Pilot keyboardist Tobias Nathaniel. Both projects were meant to coexist with 3MP, however, both Pinback and The Black Heart Procession became unexpectedly popular.

Speaking of Lee "Scratch" Perry (who just played Highline Ballroom), BHP isn't the only band that the dub legend has collaborated with as of late. The mad professor has also lent his evil talents to a forthcoming recording with Major Lazer (aka Diplo and Switch) (!) more details are forthcoming.

Full BHP dates and a ton of video from a recent show is below...