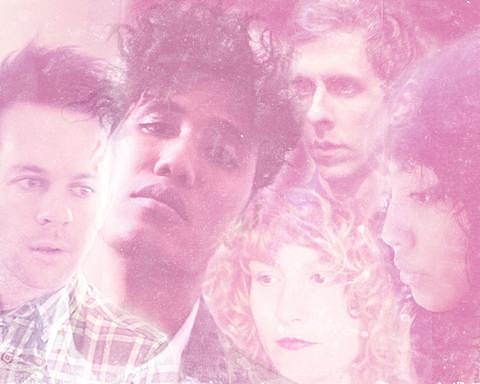 Hey, remember Black Kids? Vaulted into the spotlight from a demo on their Myspace in October of 2007 (they played one of BV's CMJ day parties that same month), they're one of the most famous cases of "too much too soon" internet hype. By summer of 2008 their rushed debut album, Partie Traumatic, was subject of one of the most infamous Pitchfork reviews ever. ("I'm Not Gonna Teach Your Boyfriend How to Dance with You" is still a pretty catchy song.) It's been five years, and they're back:

We're happy to announce that we will be performing live for the first time since like FOREVER. Many of you have inquired about whether or not we were, er, dead. And we're totally not. We just took some time to ourselves to load up on college degrees, procreate, and work on other things. We've been working on new music and hope to release album deux ASAP. So please take note of the dates below and respond accordingly.

While Black Kids have been quiet, the individual members have been doing things. Singer Reggie Youngblood released a solo track called "Taylor Swift" that's actually pretty great, especially if you dig Teenage Fanclub style guitar pop. You can watch the video for it below.

Owen Holmes, meanwhile, released records (pretty good ones too) as Gospel Music but now lives in Brooklyn and records under his birth name, Owen Cohen, still in the vaguely indiepop vein. His solo debut, A Prayer For Owen Cohen, will be out this summer and you can stream "Candy Cigarettes" below.

All Black Kids tour dates are listed, along with the "Teach Your Boyfriend" video and other streams, below...

I'm Not Gonna Teach Your Boyfriend How To Dance With You