DOWNLOAD: Black Kids - I'm Not Gonna Teach Your BoyFriend How to Dance With You (MP3) 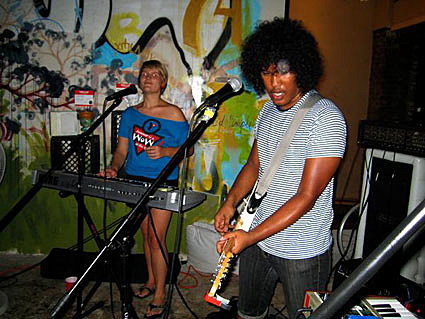 Pitchfork excited me with their choices two days in a row. Yesterday they gave Bon Iver a little boost....

THANK YOU TO PITCHFORK FOR AN OVERWHELMING RESPONSE! THE RECORD IS CURRENTLY UNAVAILABLE. PLEASE CHECK BACK FOR AN OFFICIAL RELEASE DATE SOON. [Bon Iver]

Today it was a band called Black Kids from Jacksonville, Florida - a band who I haven't posted about yet, but who I was excited to check out this CMJ - so excited, that I also booked them to play a BV CMJ show. People from the South have been raving about their live show, and I've also been loving the few songs I've heard so far...

You can download Black Kids' four-song demo, Wizard of Ahhhs, for free on their MySpace-- it's not available in stores. They're giving away something we can't buy often enough: a record with not just a distinctive aesthetic, but also one single-worthy track after another. Dueling keyboards and scrappy lo-fi guitars give rise to Go! Team-style shouted-back cheers, a communal urgency not unlike the Arcade Fire's, and an uptempo bounce paying homage to Motown 45's. In short, Black Kids make catchy, tightly executed songs that put a memorable stamp on pop's classic themes.[Pitchfork - Best New Music]

Black Kids are playing their official CMJ showcase at the Annex on October 18th with Mates of State (an NME show) (sold out). Black Kids are also playing the free BrooklynVegan show at R Bar on October 19th - with Yo Majesty and more bands TBA soon. All tour dates below....