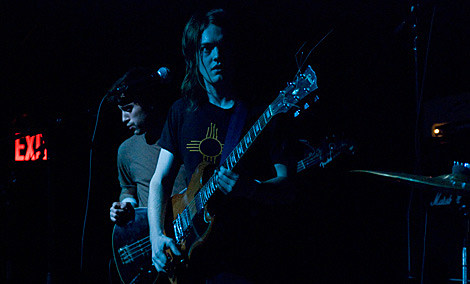 For those of you that enjoy to sauce it up on Friday nights or enjoy a light Saturday afternoon, avert your eyes! Hideous Gnosis (named after a song by the great Caïna) is "a gathering dedicated to the mutual blackening of metal and theory", and is scheduled to take place in Brooklyn at Public Assembly on Saturday (12/12) from 1PM to 7PM. The event will examine different facets of black metal via discussion, readings, performance, and much more. The many scheduled guests include Hunter from Liturgy, Nader Sadek, and Haunting The Chapel (ex-Show No Mercy) scribe Brandon Stosuy.

More info, including the flyer and the schedule are below... 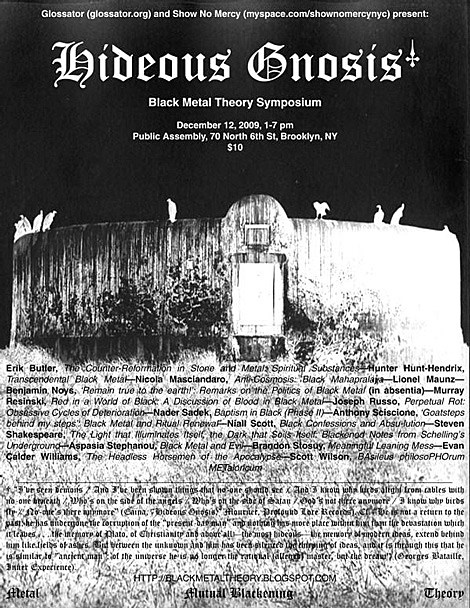 A gathering dedicated to the mutual blackening of metal and theory.

I: 1:00-2:15
The Light that Illuminates Itself, the Dark that Soils itself: Blackened Notes from Schelling's Underground
Steven Shakespeare
The Counter-Reformation in Stone and Metal: Spiritual Substances
Erik Butler
BAsileus philosoPHOrum METaloricum
Scott Wilson
(moderator: Niall Scott)

In Sadek's new performance, the phenomena of cymatics are used as mark-making tools to visualize the sound of a black metal song. "Freezing Moon," a song by the legendary band Mayhem, will be used for this transformation from sound to sight. Sadek, who has no musical training, will attempt to play this song using the guitar utilized on Mayhem's last US tour as the primary producer of sound. A flesh guitar made from a cast of the band's guitar will be laid on the cymatics system and used as the subject of this visual recording, affecting its blackened baptism.

Cymatics (from Greek: ???? "wave"), also known as modal phenomena, is the study of visible sound and vibration, typically on the surface of a plate, diaphragm, or membrane. Directly visualizing these vibrations involves using sound to excite media often in the form of particles, pastes, and liquids.
Sym-posium (together-drinking)

With sculpture by Lionel Maunz
Organized by Nicola Masciandaro