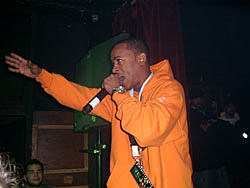 Tomorrow's SOLD OUT Black Moon & Smif N Wessun "Tribute To Classics" performance at NYC's Knitting Factory has been re-scheduled for Saturday, November 8th due to the hospitalization of Buckshot.

Upon returning from a 3 week European tour Black Moon and Boot camps front man, Buckshot suffered what appears to be a series of seizures. He was immediately hospitalized where he remains in stable condition.

Buckshot's partner and CEO of Duck Down Records, Dru Ha, stated: "While of course we are disappointed to have to reschedule a sold out show obviously nothing takes precedent over Buckshot's health. If he could walk out of that hospital on his own right now I know he would have been on that stage. He was truly looking forward to this night."

Tickets for the Sept. 26th show will be honored at the rescheduled show, Saturday November 8th. Refunds also offered at point of purchase