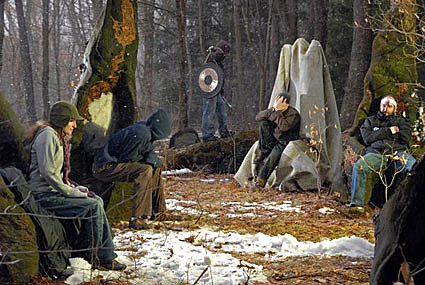 Black Moth Super Rainbow are a band from "Rural Western PA" that are touring practically non-stop betweeen now and the end of November. Two of those dates are TODAY (Aug 18) in Brooklyn, and a lot of them are opening for the Flaming Lips, and even more are as opener for Aesop Rock. You may have seen them when they not-too-long-ago opened for Fujiya & Miyagi at South Street Seaport. I didn't - it took these new Brooklyn shows, and hearing their name a million times to finally get me to listen, and now all I can say is I with I had done so earlier - check out the pscyhedelic-electro-keyboard-vocoder-heavy tracks above. Aquarium Drunkard says,

While this shit is most definitely way out there, it is also informed, and reined in by, a pop enthusiasm that keeps it from blasting off into the ether entirely. You might want to put on some headphones for this one. Dood.

Pitchfork gave their new album Dandelion Gum a 7.8. Last year BMSR also put out a split album with Austin's Octopus Project (MP3 from that above).

But what about their live show? I obviously still haven't seen it, but Rolling Stone, The New York Times, Chicago Tribune, and MTV are all raving about it. Have you seen them? There are some videos, and all tour dates below... 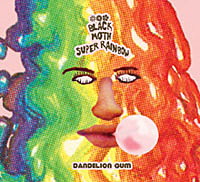