Jajaguwar label-mates Black Mountain & Bon Iver aren't actually going on tour together. Well, maybe they are, but one hasn't been announced yet. They are playing together at Bowery Ballroom on February 22nd though. Tickets are on sale. It will be Bon Iver's third Bowery show - the first was CMJ, and then he opened for Elvis Perkins. 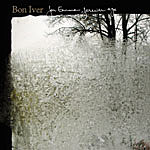 Black Mountain's new double album called In the Future is out January 22nd.

Bon Iver's re-released For Emma, Forever Ago is out February 19th. All tour dates below.....