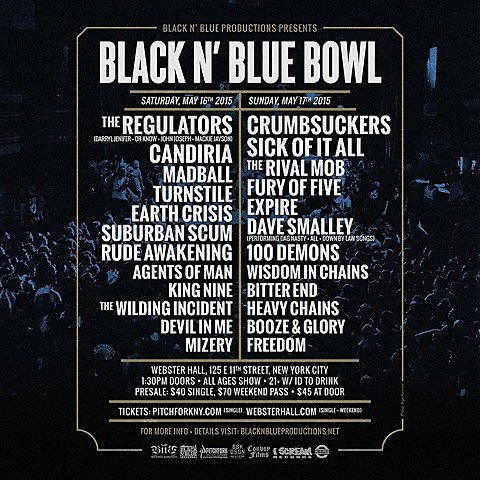 The previously-mentioned annual NYC hardcore festival Black N' Blue Bowl takes place on May 16 & 17 at Webster Hall this year, and now the complete lineup and ticket info has been revealed. The Regulators (aka Darryl Jenifer and Dr. Know of Bad Brains and John Joseph and Mackie Jayson of Cro-Mags), The Wilding Incident (featuring Lord Ezec on vocals, Jimmy Williams of Maximum Penalty on drums and Sacha Jenkins on guitar), and Earth Crisis join a lineup that already included Crumbsuckers, Madball, Sick of It All, The Rival Mob, Dave Smalley (playing Dag Nasty, ALL, and Down By Law songs), and more. Full lineup below and on the flyer above.

Two-day passes are on sale HERE, and you can get single day passes for Saturday HERE and Sunday HERE. You can also purchase tickets in person from NYHC Tattoos (127 Stanton St), Generation Records (210 Thompson St), and Lotus Tattoos (291 W Main St).

The Regulators last played NYC in September at Bowery Electric (that time just as "Regulator"). Watch a video from that show, with the updated BNBB lineup, below...

Sunday, May 17
Crumbsuckers
Sick Of It All
The Rival Mob
Fury of Five
Expire
Dave Smalley (playing Dag Nasty, ALL, and Down By Law songs)
100 Demons
Wisdom In Chains
Bitter End
Heavy Chains
Booze and Glory
Freedom