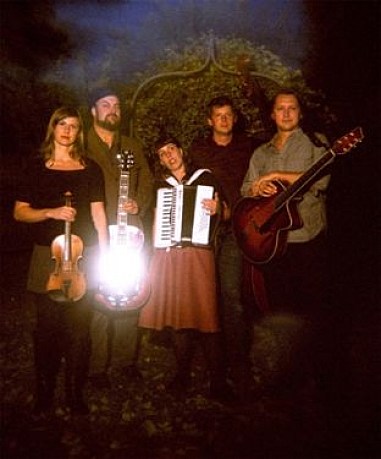 "[Black Prairie] was started by two members of The Decemberists: guitarist Chris Funk and bassist Nate Query. They decided to start a primarily instrumental string band as a way to present music that didn't really work with The Decemberists' sound. They asked another Decemberist, Jenny Conlee, to play accordion, and invited Portland musicians Annalisa Tornfelt and Jon Neufeld to add their talents as violinist/vocalist and guitarist, respectively.

Black Prairie's songs consist mostly of instrumentals, and their arrangements pull from bluegrass and old-time string-band traditions. But Black Prairie adds its own twist, mixing accordion and violin to mimic Eastern European sounds, while also incorporating Tornfelt's vocals on a few selections." [NPR]

Speaking of the Decemberists, Black Prairie are about to end a short tour in NYC tonight (10/29). They go on at 9pm at Mercury Lounge and tickets are still available. Check out their non-instrumental video for "Red Rocking Choir" below...