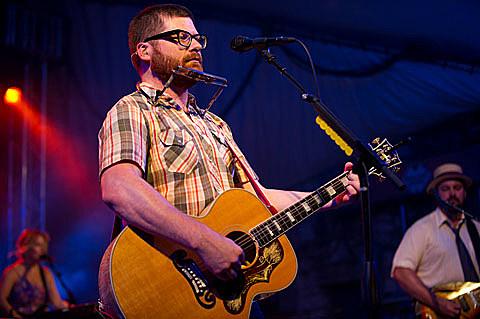 It's been a while since we've heard from The Decemberists, but the band's members are still finding ways to keep busy. Their side project, Black Prairie, whose lineup now includes four of the five Decemberists members (Chris Funk, Nate Query, Jenny Conlee, and John Moen -- aka everyone except Colin Meloy), released a new album this year which is a "soundtrack" for New York Times magazine writer Jon Mooallem's book, Wild Ones. You can stream that album in its entirety below, and read what Jon Mooallem had to say about it at Slate.

Colin Meloy plays Newport Folk Fest too, so if he and his bandmates don't team up for at least one Decemberists song, that's just cruel and unusual. It's one of three solo shows Colin has scheduled (all festivals, none in NYC). All upcoming Black Prairie and Colin Meloy dates are listed below.

Finally, as mentioned, John Moen is releasing a new solo album, Revise Your Maps, on June 25 via Jealous Butcher Records. We already posted the song "Ramble Scramble" from that album, and John just released the album's title track, which you can stream below (via Billboard).