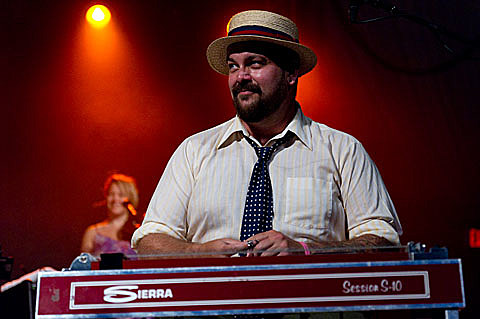 Decemberists side project Black Prairie released their new album, A Tear in the Eye is a Wound in the Heart, this past September and went on a tour which brought them to NYC earlier this month for a show at Mercury Lounge (11/10). They'll be touring again in January and will return to NYC on January 16 at Union Hall with John Wesley Harding. Tickets for that show are on sale now.

Speaking of John Wesley Harding, he's got other upcoming shows, including the previously mentioned Cabinet of Wonders show in NYC at City Winery on December 16. John has since revealed more guests for that show, and the lineup now includes Fountains of Wayne, Josha Ferris, Colum McCann, Eugene Mirman, John Oliver, Ron Sexsmith, The Silver Ages, and David Wax Museum (who also play Mercury Lounge this week). It's far from the only place to catch Eugene Mirman in NYC this month and next. Tickets for the Cabinet of Wonders show are on sale now.

Lists of dates and song stream below.