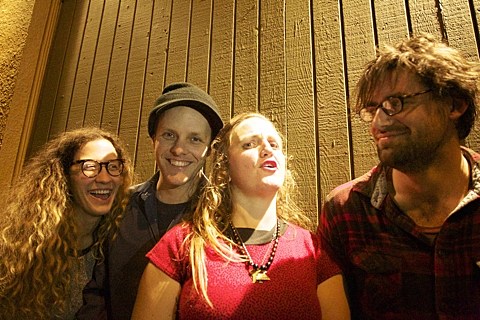 The members of Black Rainbow have been bringing DIY punk to basements, clubs, and even city streets across the USA for two decades in bands like Chickenhead, Los Canadians, The Dark Rides, Shotwell, Sharp Knife, Onion Flavored Rings, and many more. Black Rainbow was formed in 2007 when longtime singer and guitar duo (and lifelong partners in crime), Ivy Jeanne and Erick Lyle, persuaded Tulsa's guitarist, songwriter, and frontman, Morgan Stickrod, to take up the drums for a new band. Readers of Lyle's long-running magazine, SCAM, will be familiar with the exploits of Ivy and Erick's previous bands, MIAMI, a band formed with the late Matty Luv and Aesop of Hickey to play only illegal generator shows in the streets of San Francisco, and ALLERGIC TO BULLSHIT, a band known for, among other things, playing live on a flatbed truck in an anti-war parade and for handing out free stolen cans of spray paint to audiences. Picking up where these collaborations left off, BLACK RAINBOW quickly recorded a handful of 7"'s and toured the country several times.

San Francisco DIY punks Black Rainbow (not to be confused with the Dio tribute band, the band featuring Maya of the Donnas, or any other band with that name) got their start in the same early '90s San Francisco scene that the members of Shellshag were part of before moving to NYC. Having been in this band for seven years, the band are now set to release their first-ever full length album (self-titled), which comes out on July 21 via Starcleaner, the label Shellshag's been running since 1992. That album's first single is "Airless Spaces II," a punk ripper that's in attack mode for its full minute and a half, but it's a catchy one thanks to highly melodic vocalist Ivy Jeanne. You can stream that below.

We already mentioned that Black Rainbow would be in NYC for a Death by Audio show on July 26 with Swearin' and Shellshag (it also now features CCTV), and it turns out that show is part of a massive tour for Black Rainbow. The tour also includes another NYC show happening a day earlier at Shea Stadium (7/26) with Vulture Shit, Hard Nips, Cousin Brian and Slow Animals. All dates, including other shows with Shellshag, are listed below.

All Black Rainbow dates are listed, with the song stream, below...