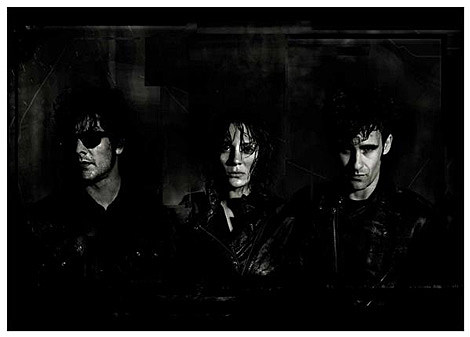 Black Rebel Motorcycle Club is revving up [pun!] to unleash their fifth studio album, Beat The Devil's Tattoo, on March 9, 2010, signifying the band's first full-length on their own Abstract Dragon, in partnership with Vagrant Records. ...The trio returned to the familiar setting of Philly to pen this record... in the very studio that produced their widely acclaimed third LP, Howl, before returning to hometown L.A. to add the finishing touches.

Just a few days before Black Rebel Motorcycle Club release Beat The Devil's Tattoo, the band will kick off a tour in Sacramento with new drummer Leah Shapiro in tow. The dates stretch through March and into April, concluding at Webster Hall in NYC on April 8th. Tickets for all dates are on on presale now. Tickets go on sale via Ticketmaster on 12/11 at noon.

BMRC recently released a three disc DVD/CD set entitled Black Rebel Motorcycle Club Live. Fans of blatantly literal titles are stoked. Featuring "two hours of concert footage captured from three sold out shows in Berlin, Dublin and Glasgow, ...behind-the-scenes footage, glimpses into the making of 2005's Howl and is rounded out with a bonus live album featuring 14 songs", pick up a copy of that set at your nearest purveyor of fine records and tapes.

In addition, the band has also contributed a track to the New Moon soundtrack, along with Bon Iver, Death Cab for Cutie, Lykke Li, Muse, St Vincent, and others. ZOMG! Are you Team Jacob or Team Edward?

Full tour dates and a few videos are below.