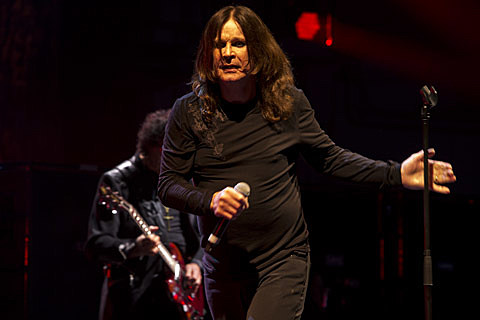 Black Sabbath, who are currently reunited with Ozzy Osbourne, Tony Iommi, and Geezer Butler all in tow (no Bill Ward though), have a new album out, and went on a tour over the summer which brought them to Connecticut, New Jersey, and other places. It felt a little strange that they omitted NYC, but they've now announced another tour for 2014 which kicks off at Brooklyn's Barclays Center on March 31! Tickets for the Barclays Center show go on sale Friday, November 22 at 10 AM. No openers announced yet, but Uncle Acid and the Deadbeats are opening their November/December European tour. All dates are listed below.

Sabbath are also documenting their 2013 tour with a new live DVD/CD Black Sabbath: Live...Gathered in Their Masses, which will be out on November 26 via Vertigo/Republic. Check out the tracklist below and more info, including different combo pack options, here. Ozzy and Geezer discussed the album at the Grammy Museum last week (11/6), you can watch a video of that conversation here.

The founder member of the Birmingham heavy metal band will be awarded an Honorary Doctorate of Arts by Coventry University on 19 November.

Iommi will be heading straight from the graduation ceremony at Coventry Cathedral to join Black Sabbath in Helsinki for the start of their latest European tour.

He has sold more than 80 million records worldwide during his career.

Iommi said was "a great honour" to receive the doctorate.

He added: "I'd like to thank everyone at Coventry University for my nomination and look forward to meeting them at the ceremony."

And in more related news, don't give Bill Ward a copy of Sabbath's new album. "I haven't heard anything off that album at all," Bill told Rock Cellar Magazine. "And to be quite honest, I don't care to either. It's too painful. If I want to rip my guts out, I'll put it on."

All dates are listed, along with the DVD/CD tracklist and a recent live video, below...

Uncle Acid and the Deadbeats support on all dates