photo: Black Sabbath in NJ in 2013 (more by Greg Cristman) 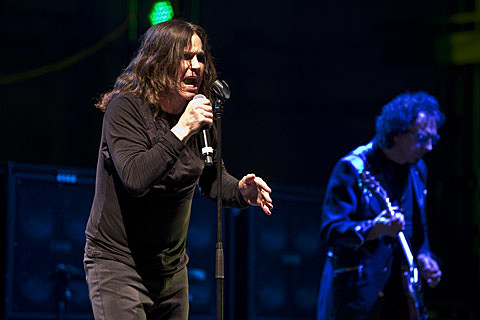 Black Sabbath, not to be confused with Mac Sabbath, are in the middle of their "final" tour, recently hitting some midwest spots on their way across the continent. Unfortunately, their 1/30 and 1/31 shows in Edmonton and Calgary were canceled due to Ozzy having sinusitis. They are supposedly still on for Vancouver tomorrow (2/3), and they've promised to reschedule those other two shows for a later date.

Meanwhile, you can check out the setlist from their recent show at Chicago's United Center on 1/22. The show was heavy on classics and managed to hit highlights from each of their golden-era albums, while also playing some material from their surprisingly good 13 LP from 2013. According to The Guardian:

The beginning of The End happened Friday in Chicago at the United Center, where the band played a two-hour set of snarling hard rock songs, played according to the rules of strict minimalism but always with brawny execution. With founding drummer Bill Ward sidelined due to a contractual dispute, his former bandmates represented their 47-year history through a setlist that combined signature songs from their first four albums with a few rarities and even something new.

For this farewell, there were no tearjerker moments, no screening of an overhead highlight reel, and certainly no reminiscing from the stage. Instead, singer Ozzy Osbourne, bassist Geezer Butler, and guitarist Tony Iommi appeared on a stage of fog dressed in black as veteran princes of darkness. They've been playing those roles since the beginning, in doom-laden rock songs about social injustices, war profiteers, the despondency caused by drugs, and real world demons that are just as relevant today as they were in the psychedelic 1960s.

As a reminder, Sabbath's two MSG shows on are coming up on February 25 and 27, before they circle back around to the NYC area in the summer for show on Long Island at Nikon at Jones Beach Theater on August 17, NJ at PNC Bank Arts Center in August 23, and Connecticut at Mohegan Sun Arena on August 27. There are still tickets for all of those shows.

Ozzy and Geezer Butler also recently spoke to Yahoo! Music about the loss of fellow British musical icons David Bowie and Lemmy. You can watch video of that below, along with the setlist from Chicago and that show postponement information.

Encore:
Children of the Grave