Black Sabbath on 'CSI,' no joke 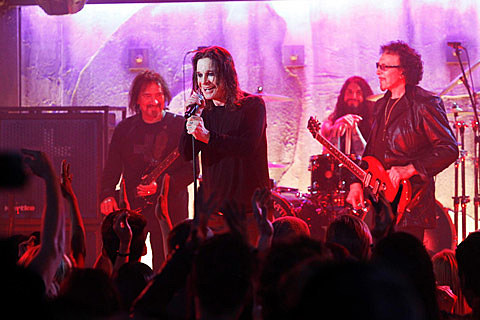 For the last year and a half I have been drinking and taking drugs. I was in a very dark place and was an asshole to the people I love most, my family. However, I am happy to say that I am now 44 days sober.

Just to set the record straight, Sharon and I are not divorcing. I'm just trying to be a better person.

I would like to apologize to Sharon, my family, my friends and my band mates for my insane behavior during this period.........and my fans.

Best to Ozzy. If he has made it before I'm sure it can happen again.

Catch a sober Ozzy Osbourne with his reunited band Black Sabbath on the road this summer, including at PNC Bank Arts Center in Holmdel, NJ on August 4. Tickets go on presale Thursday (4/18) with a presale code of "SABBATH," and regular sale on Saturday at noon.

As discussed, the first Black Sabbath single from the new album 13, "God is Dead," will be released Thursday (via Clear Channel radio stations) and another will be performed on the season finale of CSI: Crime Scene Investigation (no shit) which airs May 15. Iommi recently described the LP as one that "sits comfortably with our first three albums - Black Sabbath, Paranoid and Master Of Reality." That would make my year, but we'll see.