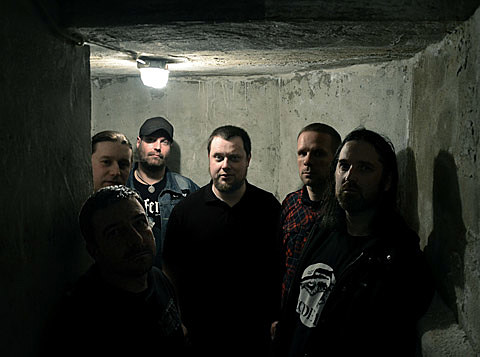 For US audiences, Germany's Black Shape of Nexus have been a cult band in the true sense of the word. BSON's records have never been pressed stateside, and their previous output has only made it across the pond via enterprising young doom fans or nefarious interweb means. BSON has never toured in North America either, but in Europe the band has already devastated audiences including at Roadburn in 2008.

Exile on Mainstream hopes to remedy the divide between BSON and the US with Negative Black, the band's latest LP due on June 5th. BSON have practiced a particularly muscular style of sludge/doom over the course of their seven years and two LPs as a band, and their latest and first effort in four years stays the course on that path of decimation. Dim the lights, crank up the volume, and listen to new tracks "400H" and "60WV", the latter of which makes its debut here today, below...

Still no dates to speak of on this side of the Atlantic for the crew, but those in the EU can check them out on May 26 at Feierwerk/Kranhalle in Munich, Germany. Until then, US fans can just dim the lights and crank up the streams below.