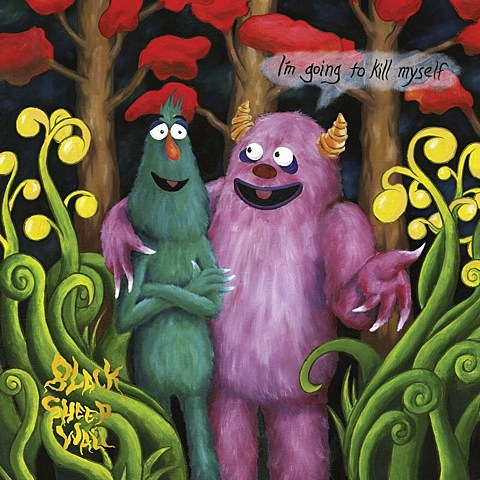 LA's Black Sheep Wall released their third album and followup to 2012's No Matter Where It Ends, this past January. Like that album, it came out on Season of Mist (also home to Kylesa, Floor and many others), and before you even listen, there's a few things that are bound to catch your attention. First of all, the album's called I'm Going To Kill Myself, and as you can see in that ridiculous artwork above, the text is written in a speech bubble attributed to a friendly-looking purple fellow with his arm around his smiling green friend. It's a scene that looks straight out of a (slightly psychedelic) children's picture book. It's also only four songs long, with each track passing the 9-minute mark and the final track being a 33-minute song titled "Metallica." With a presentation like that it's hard not to listen, even just out of sheer curiosity. And fortunately, listening to this album proves to be very rewarding.

The album is also noticeably different than anything they've done before. After two albums of pure sludge metal, they began bringing in elements from outside of the genre on 2013's It Begins Again EP, and I'm Going To Kill Myself is the farthest they've come from their roots yet. Part of this is because vocalist Trae Mallone (who has departed the band twice before) amicably parted ways with them once again, and bassist Brandon Gillickbauer took over lead vocal duties for the new LP. (Trae half-jokingly got back at the band by releasing one of the new singles with his own vocals the same day theirs came out.) The album's most drastic change is the opening (and probably best) track, "The Wailing and the Gnashing And the Teeth," where Justin adopts the melodic hardcore style of bands like Modern Life Is War and The Hope Conspiracy, and shouts over the kind of progressive post-hardcore you'd sooner expect from a Circle Takes the Square album than a sludge metal band.

The doomier tempos come back on second track "Tetsuo: The Dead Man," though it's still a clear progression from their earlier work. And while third song "White Pig" more closely mirrors their first two albums, post-rock atmospheres and gothed-out clean vocals come in about halfway through to take it into new territory. Finally, it's the 33-minute closer "Metallica," a massive trek through dissonant sludge that ends with the album title shouted repeatedly.

The band only have two California dates coming up at the moment, but hopefully they'll make it over to the East Coast soon too. Meanwhile, stream the new album below...