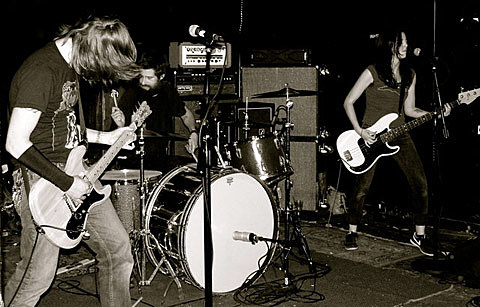 Black Skies has cancelled their appearance at Acheron, but will double up on Brooklyn shows TONIGHT (5/20) as part of a larger tour. First up is their appearance at Saint Vitus where the band will open a Tee Pee Records show featuring appearances from The Atomic Bitchwax, Mirror Queen, Weird Owl, and Heliotropes. Black Skies goes on at the early hour of 7:30PM, so get your Happy Hour on and party with the band.

Alternatively, if you can't make it to catch Black Skies at Saint Vitus, the North Carolinians will headline Union Pool later tonight on a lineup that also includes Syphilitic Lust, Company Corvette, and Gondola. The show kicks off at 9PM.

Black Skies has a new LP, On The Wings Of Time, currently available on their Bandcamp (stream it below). Produced by Kyle Spence of Harvey Milk, the thundering record is anchored by bluesy southern doom that touches into punk rock, and features dueling male/female vocals.

Both The Atomic Bitchwax and Weird Owl (not to be confused with Weird Al, who played New Brunswick yesterday) have new albums on deck too, with the former releasing The Local Fuzz on 6/21 and the latter releasing Build Your Beast A Fire on 7/26. Check out an edit of the 42 minute jam "The Local Fuzz" above.

The Union Pool show isn't the only date scheduled for Syphilitic Lust either, as the sleaze-rock locals will also support thrashers Nocturnal on May 25th at Bowery Electric with Witchaven and Villains. Nocturnal are currently touring the East Coast on their way to Maryland Deathfest (which is now back at Sonar). Speaking of Villains, if you missed it, their new album Road To Ruin is out now via Nuclear War Now.

All tour dates, the album stream, some video of Black skies performing the new material and The Atomic Bitchwax at Roadburn is below.

BLACK SKIES "Valley Of The Kings" live at The Milestone