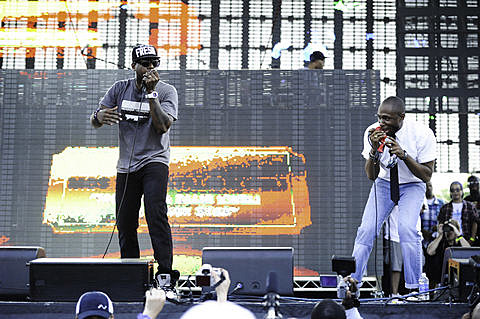 It was announced over the weekend that Black Star (the duo of Mos Def and Talib Kweli) would be teaming back up for a show at Brooklyn Bowl this Tuesday (12/17). However, not long after being announced, tickets were off sale and then it was announced that the show was cancelled. Brooklyn Bowl tweeted, "Due to circumstances beyond our control, Black Star on Tues, Dec 17 is cancelled. We hope to reschedule & apologize for any inconvenience." And Mos Def posted on his Facebook page, "Attention -- contrary to liars reports there will be no (Blackstar) show at Brooklyn Bowl 12/17. Peace."

Mos Def (aka Yasiin Bey) will instead be playing his own show the same night, Tuesday (12/17) at Highline Ballroom, the "only official" Yasiin Bey show in New York on 12/17. Tickets for that show are available.