photo via Yelp (via Jimmy C.) 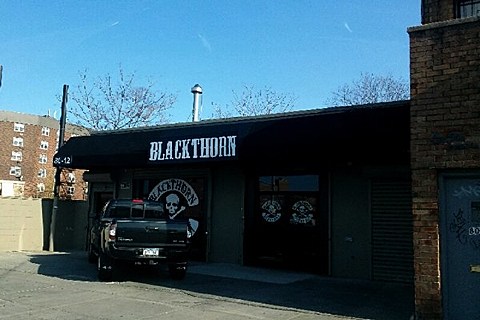 Queens music venue Blackthorn 51 opened up last year after the original Blackthorn club in the North Bronx closed down. It's located in the space that used to be another music venue known as Arena (80-12 51 Ave, Elhurst, NY). Venue owner and downtown superstar Nicki Camp, who you might know from Don Hill's and Limelight, said to Queens Ledger about the new space:

It's harder now than it was 20 years ago. The music industry has changed, the economy has changed and the world has changed

It has been good, but it's not like Manhattan. We can't book bands from New Jersey and get people from right across the tunnel. There are two tolls, so it's harder in Queens. You have to find your niche.

I used to do strictly rock back in the old days, but I learned that if you have a space you can do anything. I can have comedians in here, I can do fashion shows. Just because you have a space doesn't mean you have to limit yourself to only doing one thing.

The venue does mostly book metal and harder rock. So far bands who have played include Pyrexia, Michale Graves, and a Metallica cover band.

Judging from the picture of the venue's backline, it does look like a big place. Have you been? What do you think?

The venue currently has shows scheduled through August. One highlight is New York death metal originals Suffocation on May 10 as part of the Queens venue's Saturday Slamfest, an all day affair featuring support from a horde of more or less local death metal bands. Tickets for that one are on sale. That's Suffocation's only US show other than a European tour in the summer and Holland's Neurotic Deathfest along with Gorguts, Misery Index Malignancy and many more this weekend.

Other highlights: This Saturday, May 3, will feature a Big 4 tribute show, and Shai Hulud plays Blackthorn 51 on May 9 with a lengthy list of support bands. Brazilian veteran crossover thrash band Ratos De Parao play on May 23, giving Blackthorn 51 a good sampling of heavy happenings in May, not to mention the just announced Bullet Boys (!!) for August 7 and Tracii Guns (!!!) on June 12.