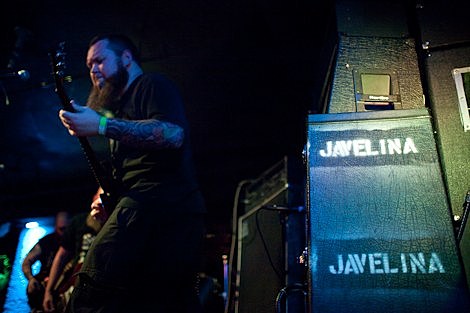 As if that week wasn't insane enough... BrooklynVegan, in association with Chronic Youth, present Javelina + Blacktusk + Batillus + a secret guest headliner (*coughsouthernlordcough*) at The Charleston on 11/18. No tickets, but the door will only cost you $10.

Javelina recently dropped the must hear Beasts Among Sheep, and it's definitely one of my favorite records of 2009 (much like in 2008). The band recently replaced their drummer and returned from a larger tour to promote the smashing new LP.

Blacktusk hails from Savannah, and their swampridden take on crusty thrash was heavily apparent on their great Passage Through Purgatory LP as well as their recent splits with the great Fight Amp, ASG, and Holy Mountain (one of their last recordings). The ASG and Holy Mountain splits are available through Ebullition, and you can pick up that Fight Amp split via Brutal Panda.

Batillus are cooling off after a killer tour with Salome and Hull, but the band's drummer Geoff Summers is currently touring Europe with A Storm of Light along with Will Lindsay of Wolves In The Throne Room who joins on as a second guitarist. A Storm of Light plays it's album release party on 11/18 at Ace of Clubs with Goes Cube (who we just interviewed) & Biclops.

The Javelina/Blacktusk/Batillus show caps an unreal week of great metal in NYC:

Nov 18th: A Storm Of Light + Goes Cube + Biclops at Ace Of Clubs