Nachtmystium at Saint VItus in 2012 (more by Fred Pessaro) 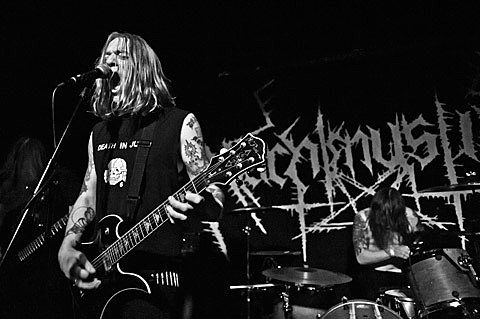 Nachtmystium frontman Blake Judd has been released from prison and is at home, nearly a month after his arrest for misdemeanor theft. While in jail, Judd, who also performs with black metal supergroup Twilight (now with Thurston Moore) and Hate Meditation, was forced to miss some Nachtmystium shows, causing the band to cancel their appearance at Metal Insider's CMJ showcase, among other dates.

Judd's arrest brought with it a storm of controversy, including a mocking t-shirt from the record label Hell's Headbangers, who, like others, have claimed that Judd has failed to deliver purchased merchandise. Judd addressed these accusations, as well as his struggles with addiction, in a new statement, which he posted to Facebook but since removed. Judd also wrote that he will take a break from music while he seeks additional treatment for his addiction, and he considered the possibility of walking away from Nachtmystium after the release of the band's forthcoming album, The World We Left Behind. You can read the letter in full below.

Nachtmystium put out a new song from the album today (via Stereogum) titled "Voyager." For fans that may feel worn thin by recent drama, it should serve as a reminder of why Nachtmystium is relevant in the first place. The song deals with Judd's battles with addiction. Here's what Judd had to say about it:

Given everything that's going on currently, I've decided to put something positive out there and give the fans who are behind the band a little something new before I retreat into silence for a few months. This is a track entitled "Voyager" off of our upcoming album, "The World We Left Behind", that will be released in early spring 2014 on Century Media Records worldwide. I've chosen this track specifically because the lyrical content and motivation behind the music written for this track has everything to do with the demons I've been battling leading up to this very dark period of my life, and I felt that it rings true to everything that is happening right now. Enjoy this track and look for more news on this recording, me and the band in general later this year or in early 2014. Thanks again to everyone who's written me personally or left a comment or a 'like' on my recent response to all of this via my personal Facebook account. Your support is something I am deeply grateful for.

Read Judd's other statement (the one he posted to Facebook), along with a stream of "Voyager," below...

Hello everyone. I'm home, alive and well. Much to certain peoples dismay, the last month wasn't that big of a deal and I actually did some serious soul searching and have made some amazing steps within my own mind on where I've been and where I'm going. It's no secret to any of you that I've dealt with serious substance abuse issues (breaking a leg and getting a four month supply of oxycodone from a doctor is where that began back in 2009...not by deciding one day "Hey, I want to be an opiate addict!") In regards to this issue, I've never tried to hide it, listen to the words in my music. It's obvious what I've been dealing with. Today, however, I'm clean as a whistle THANKS to this situation I've been dealing with and I'm SO incredibly grateful that this happened, as it's probably saved my life. As for the merch issues and money stuff, yeah, I've fucked up with a lot of you and for this I'm terribly sorry. When you're in the throes of addiction, you'll find yourself doing things that are completely out of character because you're enslaved by something more powerful than you at that point in time. I'm ashamed of whats happened regarding this as I've never wished to cheat anyone out of anything nor was it ever the intention, money just goes quick and ones priorities are completely fucked up when you're in the place that I've been in on and off over the last few years. The only thing I can do is to do my best to start clearing up each and every debt that I can as I can afford it over the next few months and hope that will clear my name on this matter with each of you who fell victim to this unfortunate set of circumstances.

I'm leaving Chicago tomorrow and will not be coming back for quite some time. I'm choosing to spend the coming months with my family and getting additional treatment for my issues with substance abuse because this is the fucking bottom for me. I've hit it and hit it hard. I have no intentions of even attempting to play any shows or work on anything else music related until I've got my life 100% under control again. Actually, I'm not even sure if I will continue on with Nachtmystium, as it's been a catalyst for chaos in my life in its very existence and what it represents creatively. There is nothing 'fake' in the contents of my music, particularly on a lyrical level on the last few records. Those are the words of truth from my life. I don't hide anything, it's out there and it's real. So, if you've paid attention, none of this should come as a surprise, as much as I hate to say that. On a positive note however, I've had an amazing run with Nachtmystium and been to many places, seen many things, played a lot of great shows, met hundreds of or maybe even thousands of amazing people through it, had experiences that most musicians can only dream of having and I was fortunate enough to get to live out many of the dreams of my own that I've had since I was a small child in regards to playing in a successful and well known rock band. Most importantly I've made a lot of records that I'm very proud of that I know many of you (per your feedback to me) have enjoyed very much, and for that I'm so grateful. I can only hope that those records will serve your collections well for many years to come and be enjoyed time and time again. I have one more in the pipeline recorded last summer that will be out sometime early next year, appropriately titled (given the current climate of my life), "The World We Left Behind", and I feel that it may be the perfect epitaph to this wild ride I've been on with Nachtmystium for the last thirteen and a half years. The record tells a story and is easily the most honest work I've ever made, so with that being said, it may very well be the bands last record as it completes the circle for me, I feel. That could always change, but as of today, that's how I'm feeling about it.

As for the shit-talking on forums and in comment threads on metal news sites and the childish moves of the people at Hells Headbangers with their attempt to further exploit this situation, I find it to be not only incredibly immature but also very embarrassing for them. I'm just thrilled to know that I have no association with this label or these other phantom internet people who speak about me as though they know me or have a fucking clue about who I am and how I live my life. In doing these things, they've only ensured to all be on a short list of people whom I will not be going out of my way to 'make good' with after such a ridiculous move on their part, regardless of what the issues between myself and them may be. That's the only time I'm ever even going to address that topic, as I will not waste my time on such ridiculous shit. Life's too short to be worried about things like this. Anyways - that's what I have to say for now. I'm fine, doing better than ever actually and I'm looking forward to getting out of Chicago for an indefinite amount of time and completely focusing on my life and not worrying about this band or anything else until I've completely regained control over the demons that have been haunting me for the last three years. To all of you who've left supportive messages over the last month, I truly appreciate it and thank and commend you for your public support of me during this time of trials and tribulations in my life. And now, I return to my silence. I will be back here sometime in the not too distant future to get back to work on my music when the time is right. Love and light to all of you who have stood by me. Your support nurtures me greatly and is appreciated on levels greater than you may know.