Nachtmystium at Saint Vitus in 2012 (more by Fred Pessaro) 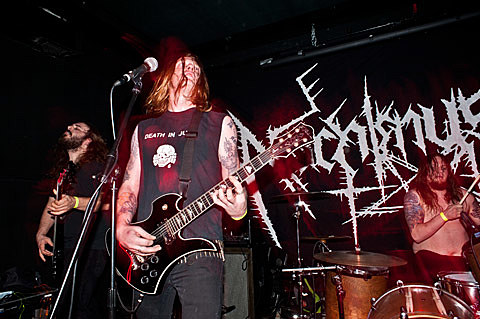 One day after Nachtmystium streamed a new (good!) song from their supposed final LP, The World We Left Behind, Nachtmystium front man and mastermind Blake Judd told Metal Mayhem Underground that Nachtmystium actully isn't finished. From the interview:

"I decided that after all the shit hit the fan, I needed to get out of the spotlight for a while, get myself some help, and start a new and more normal life. At the time, I really felt like Nachtmystium needed to end for that to happen. Now that I have had a good nine months to clean myself up as far as my drug problem goes, and have regrouped mentally and made a new life for myself, I've been able to really think about what I'm doing and where I'm going with music. Due to the immense amount of feedback I have received from fans on our Facebook page telling me how sad they were that I was bringing the band to an end, I decided that ending the band was not what needed to happen in order to live a new life. I just reprioritized how the band is going to be present in my life, and I have also decided that I will no longer be touring at all. But just hanging up the name, all the momentum and success I've had with the band doesn't seem logical to me now that I have had time to do everything I've mentioned. I don't really care what people say or think about my decision to continue on with the band after announcing that it was coming to an end. I'm sure some people will talk shit, but that is nothing new for me or this band. I'm looking at The World We Left Behind as the end of a chapter in Nachtmystium's history. What I do next will be something new, theme-wise and musically. I'm not sure what direction I will take, but it's definitely going to be something new and different."

So, to summarize, it looks like there may be more Nachtmystium in the future, but no tours.

We've followed the ups and downs of Nachtmystium over the last year or so, including Judd's arrest on theft charges, canceled shows, and more. In the interview with Metal Mayhem Underground, Judd also addressed the allegations that he ripped fans off, selling merchandise that he never delivered.

I fell behind on many orders in late 2012 and a lot in 2013 due to my drug problem. Orders were made or taken and never filled, or weren't filled for a long time. I admit to that absolutely. I was a fucking mess and this is one of many areas in my life that problems were arising from as a result of my drug abuse issues. Since then, I have worked extremely hard to get these old orders either filled or refunded in an effort to repair the damage to my reputation and most importantly, get my fans taken care of. I hope that through these efforts, and the fact that I have been selling merchandise again through our Facebook page, and filling orders promptly, that I will be able to achieve that goal.

While we wait for the next chapter, stream Nachtmystium's new song, "Tear You Down," below...