Blake Mills at the Cap in 2012 (more by David Andrako) 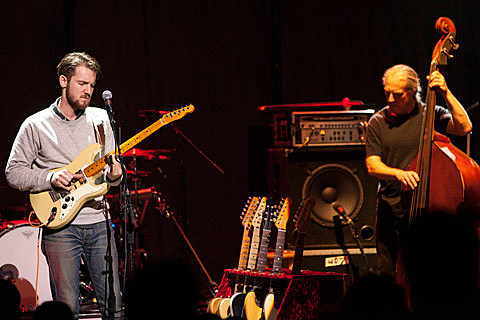 Blake Mills, a frequent tourmate and collaborator of Fiona Apple, will release his new album, Heigh Ho, on September 16 via Verve/Record Collection. The album's single, "Don't Tell Our Friends About Me," features Fiona, along with Jon Brion (who's produced multiple Fiona Apple albums, Kanye's Late Registration, and more, and scored Magnolia, Eternal Sunshine of the Spotless Mind and more), Rob Moose (Bon Iver, Antony and the Johnsons, Sufjan Stevens) and Gabriel Kahane. Stream that song, with another track from the LP, below. Another song on the album, "Seven," will feature Fiona as well.

Blake is going on a tour following the album's release which hits NYC for shows on October 1 at Le Poisson Rouge and October 8 at Rough Trade. The Rough Trade show is with National/Bon Iver/Dirty Projectors/etc collaborators yMusic. Tickets for LPR and Rough Trade go on sale Friday at 10 AM and noon, respectively.

Blake Mills - "Don't Tell Our Friends About Me"