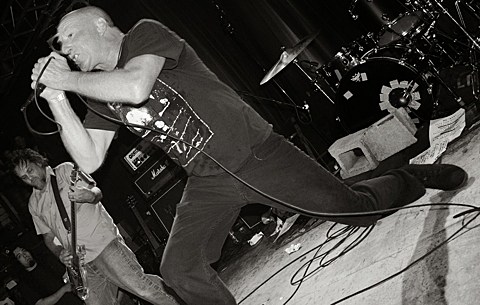 BL'AST!, the recently reformed Santa Cruz hardcore band, have added two new US dates preceding their appearance at This is Hardcore in Philadelphia. This resurrected version of the one-time SST act includes bassist Nick Oliveri (Kyuss, Queens of the Stone Age, Mondo Generator) and drummer Joey Castillo (Queens Of The Stone Age, Danzig, Eagles Of Death Metal, Goatsnake, Wasted Youth) supporting original members Clifford Dinsmore (vocals) and Mike Neider (guitar). The group will set out on a European run in late June and early July before returning home for engagements in New York, Allston, Massachusetts, and the aforementioned Philly fest.

Formed in the early '80s, BL'AST took the wide-open experimental streak of Black Flag and expanded the sonic template to include all manner of skronks and squalls while still raging in the old hardcore way. This naturally caught the ear of SST, who released three BL'AST albums: The Power Of Expression (1986 on Green World Records, reissued in 1987 on SST), It's in My Blood (1987), and Take the Manic Ride (1989). BL'AST built a dedicated fanbase based on Neider's wild playing and Dinsmore's intense poetry, becoming something of a hardcore band's hardcore band; a cult standing that would serve them well when it came time to revive the project. In 2013, Scream's Dave Grohl (who is also in some other bands) remastered It's In My Blood for Southern Lord (renaming the album BLOOD!). Another reissue, this one of The Power Of Expression (renamed The Expression of Power), followed in 2014, along with a series of tour dates including the Scion Rock Fest I recently attended. Here's what I said of their set:

Neider roamed the stage as if he needed to test every inch to see how conducive it would be as a base to rain torrential dissonant abuse upon the audience. Oliveri towered, the alternate punk universe version of Randy Johnson. Castillo ate fills alive. Dinsmore channeled his discomfort into cathartic rage. "Fuckin' With My Head" brought old faces and new together in a scream along.

BL'AST are slated to hit NYC at Santos Party House on July 23 with Villains. Tickets for that show are available now.

All dates are listed, along with streams of the still-thrilling BLOOD! and The Expression of Power below...