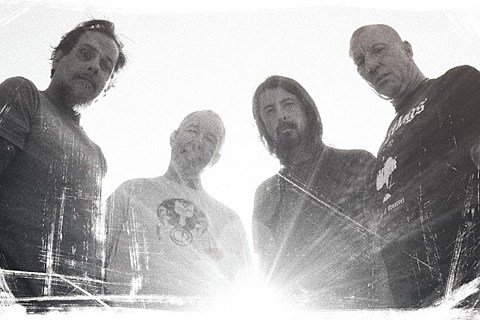 Formed in the early '80s, BL'AST took the wide-open experimental streak of Black Flag and expanded the sonic template to include all manner of skronks and squalls while still raging in the old hardcore way. This naturally caught the ear of SST, who released three BL'AST albums: The Power Of Expression (1986 on Green World Records, reissued in 1987 on SST), It's in My Blood (1987), and Take the Manic Ride (1989). BL'AST built a dedicated fanbase based on Neider's wild playing and Dinsmore's intense poetry, becoming something of a hardcore band's hardcore band; a cult standing that would serve them well when it came time to revive the project. In 2013, Scream's Dave Grohl (who is also in some other bands) remastered It's In My Blood for Southern Lord (renaming the album BLOOD!). Another reissue, this one of The Power Of Expression (renamed The Expression of Power), followed in 2014, along with a series of tour dates.

Ian Chainey wrote the above last year when hardcore veterans BL'AST! were playing reunion shows. Now the band's current lineup has signed to Rise Records and released a surprise EP of new material today called For Those Who've Graced The Fire! soon. The lineup includes original vocalist Clifford Dinsmore and guitarist Mike Neider, and they recorded it with Dave Grohl on drums and Black Flag's Chuck Dukowski on bass. (Live, the band's rhythm section is QOTSA's Joey Castillo and Nick Oliveri.) The EP just has two songs, a title track and "The Pulse." It's their first new music in about two decades, and they certainly sound like the band was inspired. More OFF! than What The..., to get an idea. (And also better than most of Grohl's recent albums with Foo Fighters.) Listen below.