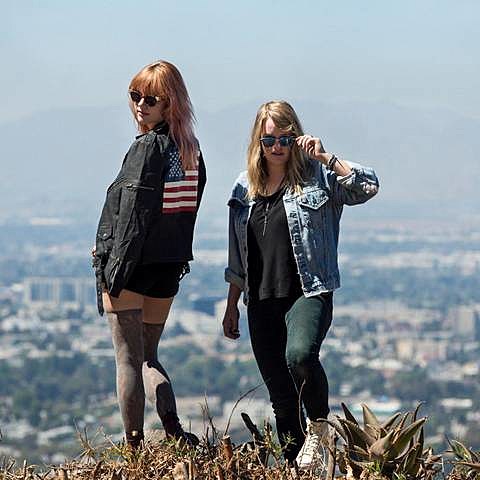 Los Angeles' punky, poppy Bleached (Jennifer and Jessica Clavin, formerly of Mika Miko) have just signed to Dead Oceans and the label will release the band's debut album sometime next year. The record was produced by Darker My Love's Rob Barbato and Jennifer Clavin told SPIN that the album will be more than more of what we've heard before:

What we really wanted to do was explore. We've been doing this since we were teenagers and we have a certain sound on our last three seven-inches, but we wanted to show some variety. This new record has songs you'll be familiar with, but there are also things that will be a surprise. It's just really fun.

Bleached just wrapped up a tour with Japandroids and have a couple shows in California coming up, including one opening for Ty Segall at the El Rey Theatre in L.A. on December 15.

Speaking of Dead Oceans, some of Bleached's new labelmates have shows coming up. A Place to Bury Strangers will play 285 Kent on Saturday (12/1) as part of a Hurricane Sandy relief benefit with Liturgy, Total Slacker and Royal Baths.

Bear in Heaven play Music Hall of Williamsburg on December 5 with Small Black and Eraas. Tickets are still available and part of the proceeds from that show will go to Sandy relief too, as will part of the bar at the afterparty which happens next door at Public Assembly.

Sun Airway, who were last through town with M83, play Glasslands on December 7 with Historics. Advance tickets are still available.

And newish Dead Oceans signee Night Beds, who released their first 7" for the label a couple months ago, have a show coming up at Pianos on December 11 with Snowmine and St. Claire. Tickets are still available.