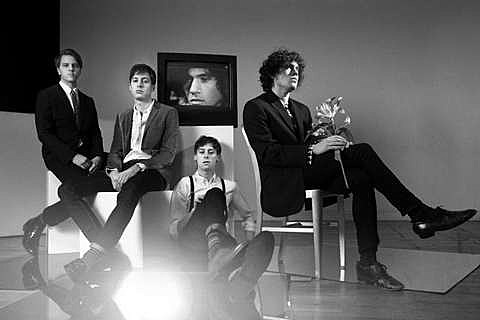 As mentioned before, Oberhofer are playing Brooklyn Bowl on Wednesday (8/29) and since we posted about that Bleeding Rainbow and Heavenly Beat have been added to the show, which makes for a pretty solid line-up. Tickets are still available but if you'd like to go to the show for free, we're giving away a pair of tickets. Details on how to enter are below.

Bleeding Rainbow's new album, Yeah Right, was supposed to come out October 9 but has now been pushed back to January 29. In the months leading up to it, the band will release a series of 7" singles, the first of which, "Pink Ruff," will be out in October, with "Drift Away" released in November and "Waking Dream" in December. You can stream "Pink Ruff" below and watch the video as well. Bleeding Rainbow head out on tour with Eternal Summers right after the Brooklyn Bowl show and will be back in NYC around CMJ. Updated dates are listed below.

The Brooklyn Bowl show will be the second show for Heavenly Beat in live band form. I caught the group's live debut at Public Assembly a few weeks back, and thought they were pretty good for a first show.

Video, streams and Bleeding Rainbow tour dates are below.

======================
For a chance at winning a pair of tickets to see OBERHOFER AND BROOKLYN BOWL: either tweet something that includes both @BrooklynVegan AND "OBERHOFER" in the tweet, or send an email to BVCONTESTS@HOTMAIL.COM with the subject line "OBERHOFER". Include your first and last name in the email. We'll pick a winner at random and contact them with more details. If you enter by email, it will not be shared with anyone else. Good luck!
======================