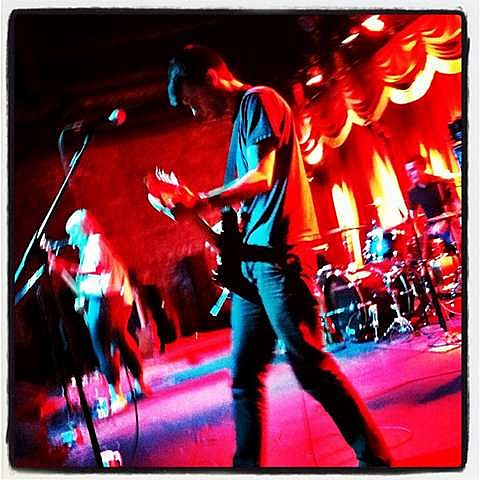 Philadelphia's Bleeding Rainbow played Brooklyn Bowl last night with Oberhofer and Heavenly Beat and had a pretty good set, rocking more of a shoegaze-meets-X vibe now that they're a four-piece, playing songs mostly from their terrific new album, Yeah Right, which recently got moved from an October 2012 release to January 2013. You'll have another chance to see them before that as the band just announced they'll play Glasslands on October 10 and tickets for that show are on sale now.

Some of you may want to go just to see openers SISU which is Dum Dum Girls drummer Sandra Vu's band who make gothy postpunk/shoegaze a la Lush or Slowdive (with a slinky dash of Siouxsie perhaps). I caught them at SXSW this year and thought they were pretty good, despite their drummer being MIA. SISU's debut album is due out any minute, but in the meantime you can stream their Demon Tapes, Vol 2 EP below (and download it for free from Bandcamp). No other SISU tour dates at the moment but seems like a long trip from L.A. just for one show and CMJ just a week later.

Also playing are new wave fans Punks on Mars who just released a new single, "People Talk," on his Bandcamp which is also a free download and streamable below. If you like King Tuff or Jay Reatard or the Knack you should check 'em out.