this image will soon only exist in pictures (and Seinfeld)... 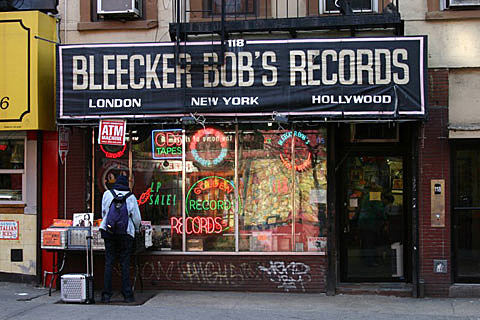 Bleecker Bob's will close its store at 118 West Third Street at the end of April, according to a manager, Chris Wiedener.

"It's kind of disappointing," said Giancarlo Caccamo, 19, a customer at Bleecker Bob's on Thursday evening, upon learning the news. The vinyl records that pack the wooden bins and milk crates in the cluttered, narrow space are an increasingly endangered species, said Mr. Caccamo, who was in search of a record by Mott the Hoople.

The store's closing seemed to sound a death knell for vinyl itself. "I just love the warm fuzz that you get," he said. "There's nothing like that sound."

Javier Medina, 43, who began shopping at Bleecker Bob's in the 1970s and has worked there as a salesman for the last decade, was more concerned about the loss of a piece of history. "This place should be a landmark," he said while chatting with Gary Rookard, 53, who sells glass pipes on a table outside. "Everybody in the world knows it."

BUT NOTE, despite what you may have heard, the NY Times posted an update to their story that reads "While a manager at Bleecker Bob's said it would become a Starbucks, the company says it will not open a store there."