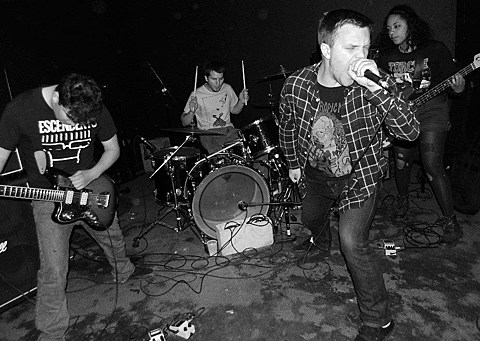 We just mentioned that Northampton, MA punks Blessed State were working on the followup to their 2012 demo, and they've since revealed more details on the release. It'll be an 8-song LP (release date TBA), and its first single, "Head Space," is out now. Their demo was filled with Replacements-y flange-guitar arpeggios, and while the fretwork is still pretty busy here, they're taking a more aggressive, overtly hardcore punk approach that's closer to Paint It Black than it is to the 'Mats. It doesn't hurt that they've got beefier production courtesy of go-to Western Mass guy Justin Pizzoferrato (Sonic Youth, Dinosaur Jr, Speedy Ortiz) either. Check out the new song, along with a recent live video of another album track, "Best Case Scenario," below.

As discussed, Blessed State will be making their return to NYC for a completely stacked show on December 6 at Shea Stadium with fellow Western Mass band California X, Syracuse noise punks Perfect Pussy, and Brooklyn garage punks Flagland. Tickets for this show go on sale Monday (10/28) at noon.