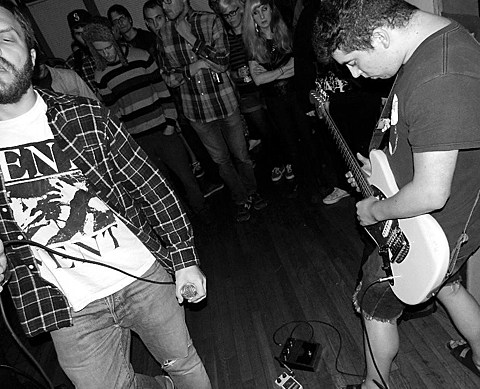 Northampton, MA punks Blessed State (whose lineup includes Brian of Iron Hand) recall the time when bands like Husker Du and The Replacements were pushing hardcore punk to its limits and coming out with something more similar to alternative rock. The guitars shift back and forth from a flanger-filled jangle to straight ahead punk n' roll, and the vocals from a bark to a half-melodic moan that just grazes the melody in his head (in a good way). And when the band break out into the occasional J Mascis-style solo, that's nothing to complain about either.

They released a four-song demo back in October of 2012, which you can stream below or download above. The cassette is available to purchase at Blessed State's bandcamp. It's a recommended listen for fans of any of the aforementioned bands or other recent torchbearers of that sound like The Men, California X, and Milk Music.

Blessed State will be playing some shows this year, including one in NYC on February 9 at 538 Johnson Ave with Ugly Parts, Working Stiff, Trash Tide, and Ylajali. More info on this show at the facebook event. Their dates also include an opening slot at the New Haven stop on Iceage and White Lung's tour together.

A list of all dates and the stream of their demo below...