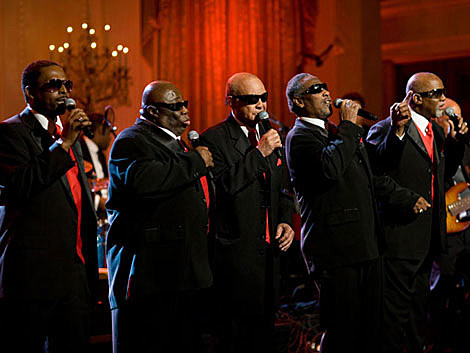 The Blind Boys of Alabama will curate a three-night series at Lincoln Center on July 12, 14 & 16. The events start with an opening night concert featuring rock artists Yo La Tengo, Lambchop, Exene Cervenka of X and Yim Yames of My Morning Jacket [plus Marshall Allen and the Sun Ra Horns]. On July 14 the focus shifts to country music, with performances by Yonder Mountain String Band, Ralph Stanley, Alison Moorer and Randy Travis, plus Ray Benson and Jason Roberts of Asleep at the Wheel. The final evening, The Blind Boys' Family Revival, will feature songs from all of the group's Grammy Award-winning albums and includes collaborations with Aaron Neville, Joan Osborne, Hot 8 Brass Band, Dan Zanes, John Hammond, and Charlie Musselwhite, among others.

Tickets for all three are on sale now.

More details on the gospel group's Lincoln Center shows, their full upcoming schedule, a video of their performance on Letterman earlier this year with Lou Reed (they also visited Daytrotter in March) and more are below...

Spirit in the Dark
Monday, July 12 at 8:00
Featuring Yo La Tengo, Yim Yames of My Morning Jacket, Lambchop, Marshall Allen and the Sun Ra Horns, and Exene Cervenka.
Starting the series off with a bang, The Blind Boys invite a variety of artists from rock's most cutting edges to bring their lyrical expressions of spirituality to the stage for an unprecedented musical dialogue. This unscripted musical adventure is an evening not to be missed.

The Unbroken Circle
Wednesday, July 14 at 8:00
Featuring Dr. Ralph Stanley, Randy Travis, The Yonder Mountain String Band, Ray Benson and Jason Roberts of Asleep at the Wheel, and Allison Moorer
The Blind Boys' have always loved the intersection of soul, gospel, and country music, and they count many country singers among their all-time favorites. By joining legendary country bluegrass artist Ralph Stanley and performing songs with special guests, the group explores the musical connections between these not-so-distantly-related musical forms. The Blind Boys' upcoming CD will be recorded in Nashville and, with this concert, audiences will hear some of this new music for the first time.

Blind Boys of Alabama Family Revival
Friday, July 16 at 8:00
Featuring Aaron Neville, Joan Osborne, Dan Zanes, The Hot 8 Brass Band from New Orleans, Charlie Musselwhite, and John Hammond
The final evening is a celebration of one of America's iconic gospel groups, as The Blind Boys and friends get together for a good ol' foot-stompin' revival, Blind Boys-style, featuring songs from all of their Grammy Award-winning albums.