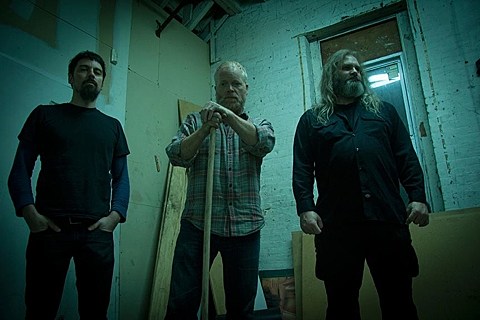 Experimental instrumental rockers Blind Idiot God's career dates back about three decades, to when they released their Martin Bisi-produced 1987 self-titled debut on SST. Two Bill Laswell-produced albums followed, Undertow (released in 1988 on Laswell's Enemy label) and Cyclotron (released in 1992 on John Zorn's Avant label), and then the band's studio output stalled for 23 years -- though they did record the song for the opening credits of Alex Winter's 1993 film Freaked with huge B.I.G. fan Henry Rollins on vocals -- until they put out their fourth LP this year. The album's called Before Ever After, is available on original guitarist Andy Hawkins' label Indivisible Music, and Andy co-produced it with Bill Laswell.

The band went through a few lineup changes before releasing the record. Andy Hawkins has been joined by Khanate drummer Tim Wyskida since 2001 (original drummer Ted Epstein left in 1996), and though original bassist Gabriel Katz played on the new record, he was replaced by Will Dahl in 2012 due to his problems with tendinitis and hearing loss (which also were part of what delayed the new record). Jason Bailey reviewed the album over at Invisible Oranges, writing:

The record follows a loose structure of alternating between songs that show off the more heavy and dissonant side of the band and those that feature more of the dub and funk influences that separate the group from other loud instrumental acts. So, a track like "Earthmover" that sounds like a Berklee thesis in stoner metal is followed by a psychoactive reggae jam like "Night Driver." These sonically split personalities could make for a disorienting listen, especially given the protracted nature of the album's recording sessions, but BIG are ambitious and talented enough to pull it all off.

You can stream two of the heavier tracks, "Antiquity" and "Wheels of Progress," below.

B.I.G. played a release show for the new album earlier this month at The Paper Box in Brooklyn (presented by Invisible Oranges), which unARTig caught and has full-set video of, which you can watch below. To compare, he also uploaded a full set of theirs from 1989 (camera work by Oliver Müller, Karsten Schulze & Thomas Schulze), and you can watch that below too.

Their next show happens April 17 at Saint Vitus with Insect Ark, the project of past Michael Gira collaborator Dana Schecter. Tickets are on sale.

Song streams and videos below...