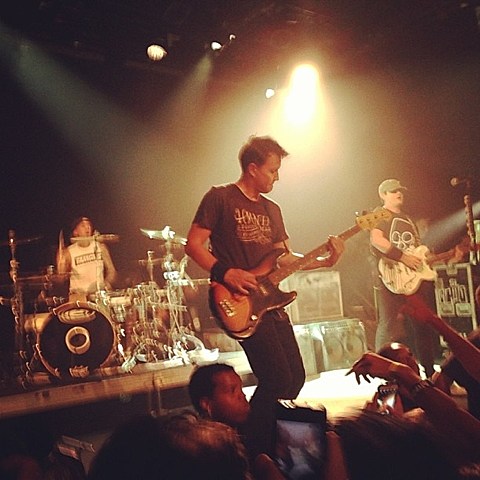 When I was 8 years old I first heard "What's My Age Again?" by blink-182 and I still credit that as the moment I realized music was important to me. Before that I had known my parents' classic rock records (many of which I fully appreciated years later) and '90s boy band-era pop, but something about those perfect power chords, speedy tempos, and blunt lyrics was different than all of that other stuff, and it was exactly what I was looking for. It led me to the "punk" section of my local CD store, which in turn began my hunt to eventually discover everything I listen to today (in fact, blink-182's cover of Dinosaur Jr.'s "Freak Scene" is the first time I ever heard that song). Forget nostalgia, this is an important, milestone band. And yet, for one reason or another, I never got the chance to see them. Until last night (9/11). At Music Hall of fucking Williamsburg.

Blink-182 is 100% pop punk, no doubt about that, but like I implied above, their influence extends far beyond that. Shirts I saw people wearing at the show included The Smiths, Misfits, Dead Kennedys, and Balance & Composure. Overheard conversations about other recent NYC shows people saw included Passion Pit and Glassjaw. And of all bands, Brooklyn indie darlings DIIV opened the show. Cole told the crowd that blink-182 was the first song he ever learned on guitar, and Mark Hoppus could be spotted watching the band from the balcony. You might remember that he's openly a fan.

And the actual show was honestly great. Of course somewhere inside of me the preteen me was like "HOLY FUCKING SHIT, I'M SINGING EVERY FUCKING WORD TO 'ALL THE SMALL THINGS' LIKE TWENTY FEET FROM THE GUYS WHO WROTE IT," but it was a good show beyond nostalgic value. Travis was a maniac behind the kit as usual, Mark still runs around stage like he's 23, and Tom doesn't, but he's at least sounding great these days, which wasn't always the case in Blink's post-breakup period. And all the songs were good. Even the Neighborhoods songs were good. If you had walked in that room, knowing nothing of blink-182's fame, polished production, or goofiness, and saw the whole place going nuts with the band ripping through "Josie," you'd swear you just found the greatest new rock band. Until someone told you that song came out over a dozen years before Wavves, Cloud Nothings, and Japandroids began doing a similar thing.

Proceeds from the Music Hall of Williamsburg show will benefit "burn treatment centers, plus research and treatment for cancer, diabetes and other life-threatening diseases," as will the t-shirt sales of Red Bull Records-signed opener New Beat Fund. Check out pictures of blink-182 at Wellmont Theatre, and if you're in Chicago, catch them at Riot Fest this weekend. The setlist from MHOW below...

blink-182 at Music Hall of Williamsburg - 9/11/13 Setlist:
Feeling This
Up All Night
The Rock Show
What's My Age Again?
Dogs Eating Dogs
Down
I Miss You
Wishing Well
Disaster
Dumpweed
Always
Violence
After Midnight
First Date
Heart's All Gone
Man Overboard
Ghost on the Dancefloor
All the Small Things