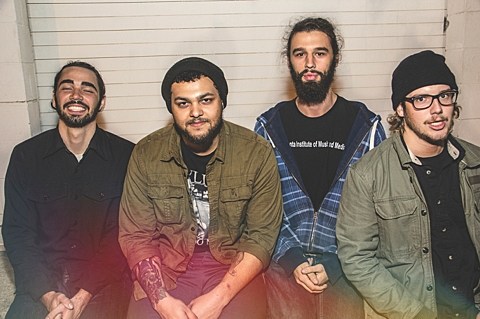 Atlanta's Blis. debuted in 2013 with the self-released Moving Foward EP, and earlier this year they followed it with Starting Fires in my Parents House on Soft Speak Records. Starting Fires quickly and deservedly gained some internet buzz, and then they landed a deal with Sargent House (Boris, Russian Circles, Chelsea Wolfe), who will release their first full length this fall.

Starting Fires has Blis. pulling equally from the kind of indie rock and post-hardcore we were getting in the early 2000s, but that (mostly) didn't start crossing paths until more recently with things like Modest Mouse / Brand New shows. They're "indie rock" in the sense that they seem to be consciously writing rock music that isn't made for the radio. It has tricky time signatures, off-kilter dynamic shifts, and vocals that some people might say "sound weird." Some moments are quiet and singer/songwriter-y, and out of nowhere they'll switch to huge power chords and piercing screams. It's really promising stuff, and this upcoming album seems like one to look out for.

Meanwhile, stream the EP and watch the new video for opening track "Floating Somewhere High and Above" below. The band's only upcoming show at the moment is hometown festival Wrecking Ball with the stacked lineup of Descendents, Judge, Desaparecidos, The Get Up Kids, Modern Life Is War, American Nightmare, The Appleseed Cast and more (tickets).