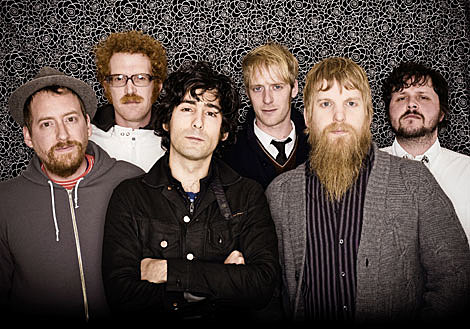 Blitzen Trapper will release a new album, Destroyer of the Void, June 8th on Sub Pop.

"During two distant and brief breaks from the band's near-incessant touring for Furr--one in January 2009 and the other in January 2010--Earley and a few of his bandmates entered the attic studio of the lauded Portland musician and studio engineer who had recorded Furr standouts "Lady on the Water" and "Black River Killer," Mike Coykendall (Bright Eyes, M Ward, She & Him). In those two winters, in that old attic, Coykendall worked with Earley to bring life to these songs, including material the songwriter had been working on for years, most notably the piano ballad "Sadie." The producer wasn't the only local luminary to fill out the album. Preternatural musical siblings Peter Broderick (Horse Feathers, Efterklang) and Heather Woods Broderick (Efterklang) wrote the album's string arrangements, while folk standout Alela Diane lent her angelic vocals to the duet "The Tree."" - Sub Pop

One one of the new tracks is a free download above. The full tracklist is below.

On June 2nd they kick off a tour that brins them to Webster Hall in NYC on the 16th. Tickets go on sale Friday at noon. All dates below too...

Destroyer of the Void tracklist
1. Destroyer of the Void
2. Laughing Lover
3. Below the Hurricane
4. The Man Who Would Speak True
5. Love and Hate
6. Heaven and Earth
7. Dragon's Song
8. The Tree [ft. Alela Diane]
9. Evening Star
10. Lover Leave Me Drowning
11. The Tailor
12. Sadie