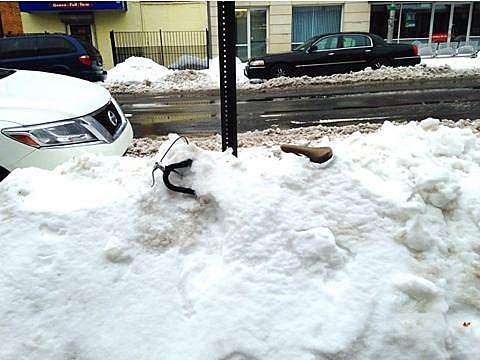 Despite the snow dumped on us last night, there haven't been too many weather-related cancellations, show-wise tonight (2/13). Perhaps bands and venues thought if third graders have to go to school we can play a show. Still, there are a few and here are what cancellations and postponements we're found:

Unrelated to the snow, Lee Ranaldo and the Dust dropped off tonight's Union Pool show, but Steve Gunn, Garrett Devoe and Mike Wexler are still playing.

The Voluptuous Horror of Karen Black's Valentine's Day Spectacular has been "postponed to March 2. All tickets for the original date will be honored.."

However, the Valentine's Day Eve Ladies Of Soul Tribute with XAVIER and Friends at Joe's Pub is still on. One of those friends is Magnetic Fields maestro Stephin Merritt.

Fort Lean are no longer playing Baby's All Right tonight, but the early and late shows have been combined into "one blizzard of good times" with Sacco, Tropic of Pisces, Genghis Hans, and American Royalty. Doors are at 9:30 PM.

Tonight's AWKWAFINA show at Pianos has been moved to Wednesday February 26 due to "5 foot deep slush puddles on every corner."

UK act Deaf Havana's early show at Mercury Lounge with Born Cages has been canceled, but the late show with Timbre Timbre is still on.

UK band Peggy Sue would like you to know that despite there being "literally more snow than we've ever seen in our lives but our show at @glasslands is ON. I repeat OUR SHOW TONIGHT IS ON."

††† (Crosses) is still on at Music Hall of Williamsburg.

Unrelated to the snow -- unless he's better meteorologist than Sam Champion and knows something we don't -- but we' thought we'd mention it anyway: Mos Def has cancelled his 2/27 Highline show (which was already a makeup date).

Anything we missed? Stay warm and dry.