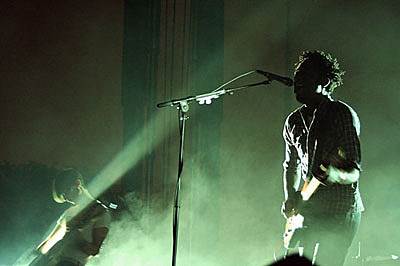 "Anything that a band can do outside the norm, to play by it's own rules, kind of forces its fan base to come to it in another way," [Kele] said. "I really shouldn't be thinking too much about that sort of thing, I should be thinking about making music."

He does think about it some, though: "When you're aware that you're part of the machine that's just selling stuff to kids it's disheartening."

Also: "There' a generation of kids that are so savvy about marketing that they don't take it seriously."

So far, it's proven a success. Though the band is just now hitting the road with the album in earnest - normally bands have played a few shows on a tour before it hits shelves, or are in the bus within a month - Okereke said he'd do it again this way.
[Phoenix New Times]

Just when you started to wonder if Bloc Party could sell out the (not-free) show they booked at NYC's large Terminal 5, they almost do, and add a second one. I guess they're doing just fine. Both shows are with Longwave. The March 24th show is still on sale. The March 25th show goes on presale Wednesday, followed by regular sale on Friday. All dates below...